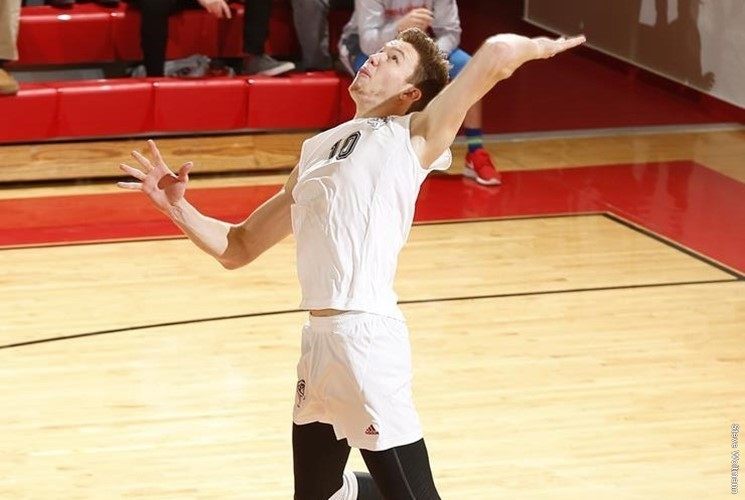 The #7 Lewis men's volleyball team took advantage of a sluggish and error-filled McKendree team in rout of a 3-0 sweep. Current Photo via Lewis Athletics

The #7 Lewis men’s volleyball team took advantage of a sluggish and error-filled McKendree team in rout of a 3-0 sweep.

The Flyers were able to hold McKendree to a low .013 hitting percentage,  while Lewis hit for .137. Both teams were error ridden but it came down to who committed the least amount, which ended being Lewis with only 19 compared to McKendree’s 27.

The first set of the match was a back and forth battle between the teams, with the Flyers coming out on top at 27-25. The second set had a bit more cushion for Lewis, while the final set was a dominant performance from the Flyers.

Mitch Perinar led the way for the Flyers with 11 kills while Ryan Coenen added six kills and four blocks.

Lewis redshirt sophomore opposite hitter Mitch Perinar (Channahon, Ill./Minooka) topped the Flyers with 11 kills and a hitting percentage of .296 (11-3-27).

Lewis returns to action on Saturday (March 18), as the Flyers welcome No. 2 ranked Ohio State to Neil Carey Arena for a 7 PM first serve.

The McKendree University men’s volleyball team suffered a road sweep to the No. 7 Flyers of Lewis University Thursday night in a Midwestern Intercollegiate Volleyball Association road match up. The Bearcats fell by scores of 27-25, 25-21, and 25-13.

The loss dips McKendree to 7-15 overall and 2-7 in MIVA play. The Bearcats return to action Sunday against No. 10 Loyola University Chicago at 4 p.m. in Chicago, IL.

Walker and Rueter each put down a pair of kills to give McKendree an early 8-6 lead. The teams traded 3-0 run as the Flyers took a 9-8 lead before a kill from Walker and an ace from Frank put the Bearcats back on top at 11-9. Lewis countered with three more points to go up 15-13, before a kill from Walker tied the set at 15. A 4-1 run from McKendree put the Bearcats ahead 19-18 after kills from Fiduccia, Walker and Patterson all scored. The teams traded 3-0 sprees as the set shifted to 22-21 until a 3-1 run from Lewis forced set point at 24-23. McKendree rallied to tie the set at 24 and again at 25, but the Flyers held on earning the final two points of the set to take a 1-0 lead.

A kill from Walker followed by back to back blocks from Schmidt gave the Bearcats a 3-2 lead to open set two. Lewis followed with a 5-1 run to take a 7-4 lead, but McKendree rallied with a 7-2 run after Schmidt, Patterson, and Walker all tallied kills. The Flyers shot back with a 5-0 run to go up 14-11 before moving ahead 19-15. McKendree used a 3-1 run to slash the lead to 21-19, but Lewis followed with four of the next five points to take a 2-0 lead.

The Flyers used a pair of 4-0 runs to jump ahead 13-7 in set three. McKendree battled back with three of the next four points, but Lewis halted the run after three straight errors from the Bearcats followed by a 5-0 run to close the match and earn the win.