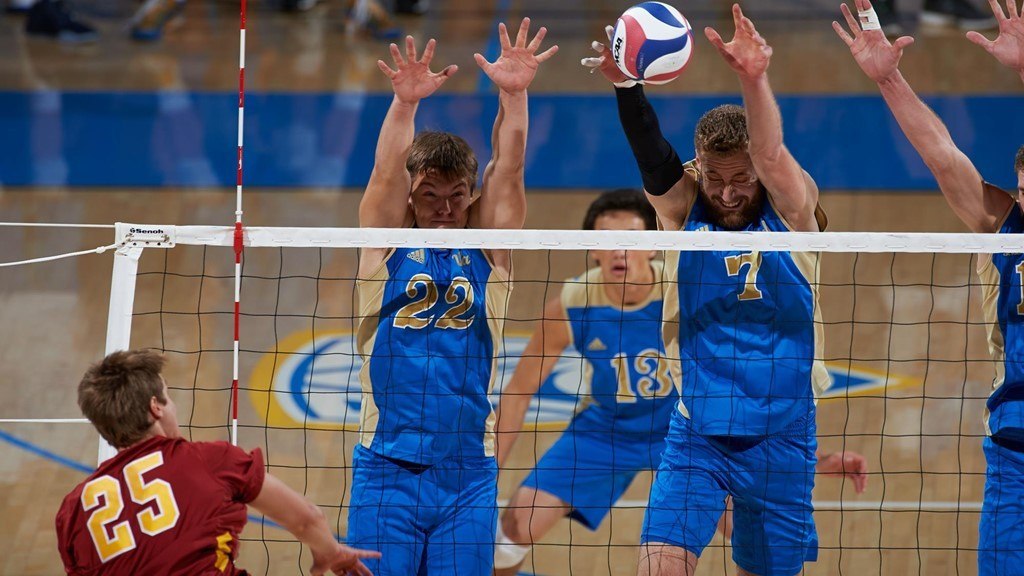 The Bruins jumped to a quick 6-0 lead in the first set behind Mitch Stahl‘s serve and eventually ran up the score to 11-3 before Lewis rallied back to close the gap at 16-13. Behind five Dylan Missry kills in the first set alone, UCLA was able to grab the first set 25-20.

The second set started a little closer, with the score tied up at four all. The Bruins were able to go on a 7-1 run to widen the gap to 11-5. Lewis fought back to bring the score within four at 22-18 but was not enough to bring them back into the set, dropping the second 25-21, giving UCLA the 2-0 advantage in the match.

UCLA was able to come to a 4-1 lead in the third, but Lewis managed to tie the set at 6-6. The Flyers kept the momentum going to pull ahead 13-10, but the Bruins pushed back tying the set at both 14 and 15 before Lewis strung together another run, leading by four late at 21-17. The Flyers were able to push forward to take the third set 25-20.

The final set of the match began close at 5-4 but UCLA was able to pull ahead at 18-11. To finish the match off Hatch put down a pair of aces, closing the fourth at 25-18.

Lewis outblocked UCLA 14-6 but the Bruins were able to slam down 10 more kills than the Flyers at 51-41.

The Flyers continue their west coast stint with #14 USC and #15 UC Santa Barbara this weekend.

The Bruins came out on fire in set one behind the serve of senior Mitch Stahl who stayed at the line for five straight points as UCLA took a 6-0 lead. The Bruins built the margin up to 11-3 before Lewis mounted a rally to close to 16-13. A kill by Christian Hessenauer ended a Flyer run and UCLA quickly moved back in front 20-15. Dylan Missry led UCLA with five kills in the set as the Bruins hit .400 as a team.

In set two, UCLA broke a four-all tie with seven of the next eight points, taking an 11-5 lead following an ace by Jake Arnitz. Lewis came back to get within four at 22-18, but kills by Missry and Arnitz took care of business and gave UCLA the set 25-21. The Bruins hit .522.

UCLA moved to a 4-1 lead in set three before Lewis rallied to even the score at 6-all. The Flyers gained the momentum and pulled out to a 10-13 lead. The score was then level at 14 and 15 before the visitors put another string together for a 17-21 edge. A Martin kill pulled UCLA to within 20-23, but Lewis had the answers for a 20-25 win. The Bruins had 10 attack errors in the set, more than in the first two sets combined, and hit just -.037.

JT Hatch‘s kill pushed UCLA in front 5-4 in set four. An ace from Stahl made it 10-6 for the Bruins. A Stahl kill made it 18-11 and UCLA finished off Lewis on a pair of aces by Hatch, who equaled his career-high with four for the match.

Hessenauer finished with 12 kills for his third straight match in double-figures. Arnitz had nine kills, two aces and five digs. Stahl tallied two aces and six kills. Missry added eight kills. Smith chipped in with seven digs and two blocks. UCLA out served Lewis 8 to 6, but the Flyers won the blocking battle 14.0 to 6.0. UCLA hit .300 for the match to .202 for the visitors from Illinois.

With the win, UCLA improves to 12-7 overall, while the Flyers drop to 15-4 on the campaign.

Lewis returns to action on Thursday (March 9), as the Flyers head across town for a 7 PM PT showdown with USC.