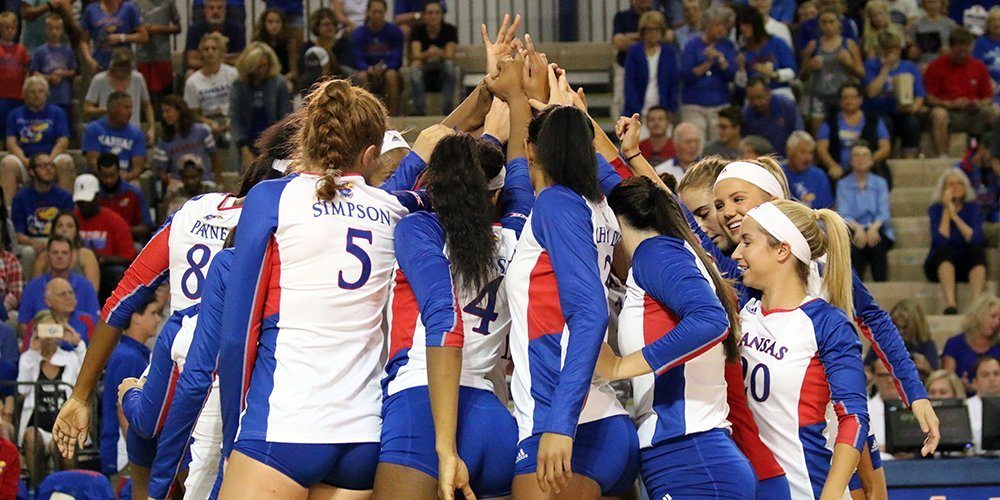 #9 Kansas and #14 Kentucky square off on a Labor Day (September 4) filled with action. Archive Photo via Kansas Athletics

Week three kicks off on Labor Day with a few mid-majors joining in on a day that features a top-15 matchup in Lawrence, Kansas. As the non-conference slate is now halfway through for a majority of teams, schools will look to distance themselves or add big wins with more established rankings in the third week of the season.

The Jayhawks are off to another strong start as they sit at 6-0 on the year. They’ve beaten some teams who could push for the 2017 NCAA Tournament, but have yet to face a top 25 VolleyMob team. That ends on Labor Day as they host an upstart Kentucky squad in a match that features two star hitters in Kelsie Payne (Kansas) and Leah Edmond (Kentucky).

This starts a big week for Kansas, who also have Belmont, Purdue and Creighton on the docket. All four will be at home as they look for strong resume builders in the non-conference.

Kentucky lost their first match of the season last week to a top-10 opponent on the road in Creighton, but also scored two high-level wins in matches against Northern Iowa and USC. They also took down Utah a week prior and will look to add Kansas to their collection of big victories.

Youngstown State is off to a winning start as they continue to build on rough 2016. Meanwhile, La Salle, who also had a losing record in 2016, tries to keep things rolling as they’ve won six straight after falling in their opener. Regardless of the result, one team will add another notch to its improving strong start in 2017.