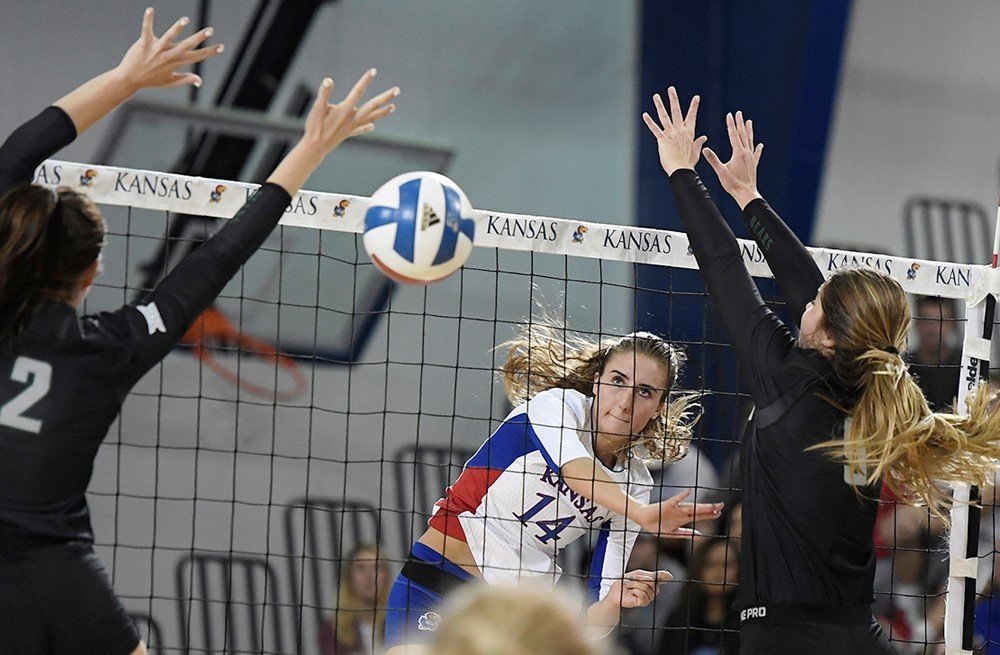 Manhattan, Kansas – #9 Kansas escaped Kansas State in a road meeting with their rival by overcoming a 2-1 set deficit. The win gives Kansas a 1-0 start to Big 12 play as Kansas State falls to 1-1 in conference.

In the opener both teams exchanged early blows, but Madison Rigdon earned a kill to give Kansas a 5-4 lead before serving. That’s when the ties stopped in the first as Kansas State struggled in reception and had a ball-handling error, a bad set and a Rigdon ace to push Kansas in front 8-4. That lead would held until the end, 25-20.

The second set started similarly to the first with Kansas ahead 6-2. Kansas State battled back and tied things at 12-12 before earning their first lead of the match. That wasn’t enough to stun the Jayhawks completely though, as the two sides would go back-and-forth. That changed late as Kansas State went on a 6-1 run to close out the set 25-21.

Kansas responded in the third with an 8-3 start to force a Kansas State timeout. That timeout proved worthy as the Wildcats took advantage of Kansas errors and held a strong defense to tie at a dozen. After a Kansas timeout, Kansas State hit another spurt and won six of seven to go up 18-13. A Kansas State serve into the net may have turned the momentum a bit though as Kansas would retract to 21-20. However, the Wildcats would sprint to the finish with four of six as redshirt freshman Peyton Williams (14 kills while hitting .462) tooled one off the block for the set victory.

Set four started the same way sets one through three went with Kansas jumping out in front as they led 13-7. This time though, they avoided the Kansas State run as they would hold onto that lead throughout with a potent offense that would force a fifth set.

After the two sides split the first pair of points, Kansas earned three straight off kills from their top three attackers for the match in Rigdon (18 kills while hitting .267, eight digs), Kelsie Payne (14 kills) and Taylor Alexander (11 kills while hitting .588). Following a timeout, the Jayhawks tacked on another to the run but were countered by a Kansas State run that was ended by an Ainise Havili joust – one of her eight kills to go with 55 assists and 10 digs. Kylee Zumach (10 kills) drilled one into the court before Kansas had an overpass get knocked back down by Brynn Carlson to tie at seven. Zsofia Gyimes then logged an ace to put Kansas State up at the switch 8-7. From there, each team traded heavy shots but at 11-11, Zoe Hill and Payne earned a block to go in front 12-11. They lost out on two set points, but Payne put Kansas in front 15-14 before Rigdon netted the final kill for the five-set win.

Kansas totaled a .342 mark for the match to Kansas State’s .278 as both offenses gelled while each team had moments of struggles defensively. Kansas now moves on to play Iowa State at home while Kansas State now

“Our team likes playing here because we know it’s going to be a good atmosphere,” Kansas head coach Ray Bechard said. “The heat was different today than what we experience. But hey, it’s part of the game. I’m glad it was a high-level volleyball match.”

Kansas made its way to a Big 12 Conference-opening win by recording a .342 hitting percentage and coming up with some key plays in the fifth set to clinch a 15th-straight victory over a Big 12 team.

Senior outside hitter Madison Rigdon led the Jayhawks with a match-high 18 kills, while fellow senior All-Americans Ainise Havili and Kelsie Payne contributed double-doubles. Payne finished with 14 kills and 12 digs and Havili contributed 55 assists and 10 digs to guide Kansas to its third-best team hitting percentage of the season. Sophomore libero Allie Nelson served up three aces and a match-high 17 digs.

KU fell behind in the match, two sets to one, and rallied to win the fourth and fifth sets to improve to 10-1 in the last 11 matches against its in-state rival.

“That’s going to be life in the Big 12 this year,” Bechard said. “Boy, K-State played hard. Kansas played hard. That’s the best match we’ve had this season, just if you’re a casual fan. Momentum was going both ways. We looked like we were out of it after being down two sets to one. Then we played about as well as we have all year in the fourth set. Got off to a good lead in the fifth set, and back K-State came to make it close down the stretch. Just great volleyball. Both teams hitting for a high percentage-wise. We end up getting enough touches and stops at the end to make it happen.”

Kansas hit the ground running in the first set as three early aces — two from Nelson and one from Rigdon — put the Jayhawks ahead, 15-10. Payne had three kills on her first six attempts while playing six rotations for the first time in two matches. Kansas clinched the first-set win after K-State staved off two set points until Rigdon notched a kill on the third set point to give Kansas the 25-20 decision.

Three more kills by Rigdon early in the second set allowed Kansas to jump out to a 6-2 lead, forcing a KSU timeout. The Wildcats were able to regroup and rally to tie the set, 12-12. The in-state rivals would go back-and-forth to the tune of 12 ties and five lead changes before K-State evened the match with a 25-21 second-set victory. Both teams recorded a .424 hitting percentage in the second set — Rigdon and senior middle blocker Taylor Alexander led KU’s second-set offensive onslaught with five kills each.

The start and end result of the third set mirrored the second set as Kansas sprinted out to an early 8-3 lead, only to see K-State rally and win a close decision, 25-22. The Jayhawks began to feel the effects of playing inside an air condition-less facility during a 90-degree day as Payne exited the court get hydration treatment and returned later in the set. Meanwhile, K-State was firing on all cylinders with 20 team kills on a .341 hitting percentage in the third set alone to take a 2-1 set lead in the match.

Payne came back strong in the fourth set to help put Kansas back on track with a 25-15 fourth-set victory. Alexander notched her second five-kill set of the match — her 10th kill of the day gave Kansas set point at 24-15 lead. The Jayhawks officially forced a fifth set as Payne registered a kill on set point. During the fourth set, Payne reached a double-double for the second time this season and 10th time in her career. The Jayhawks pass-and-serve unit was a key factor in forcing a fifth set as well, recording an 86 percent side-out rate in the fourth set.

Kansas put its best foot forward to start the fifth set, sprinting out to a 5-1 lead behind kills from sophomore outside hitter Jada Burse, Payne, Rigdon and Alexander. K-State was able to respond to KU’s early lead by flipping the script to take a 9-7 lead after Zsofia Gyimes served a 4-0 run, including an ace that careened over the net. Coming out of a KU timeout, back-to-back kills from Burse tooling off the KSU block tied the fifth set, 9-9.
s
Sophomore middle blocker Zoe Hill was involved in two huge blocks — one with Havili and another with Payne — late in the fifth set to give Kansas a 12-11 lead and force a KSU timeout. Hill notched her eighth kill of the day, followed consecutively by a service ace from Nelson to give Kansas match point, 14-12.

K-State would recover to tie the set at 14-14 and force extra points in the match-deciding set. After Payne gave Kansas its second match point, Rigdon tooled off the opposing block for a kill on match point to clinch the victory for the Jayhawks.

Kansas returns to Lawrence for its Big 12 home opener against No. 18 Iowa State on Wednesday night.

“I thought we competed hard,” said head coach Suzie Fritz. “I thought we played well at times, but still trying to develop greater consistency in a lot of phases. But I like the way we competed.”

K-State bounced back from an opening-set loss – in which KU never trailed – to win Sets 2 and 3. The Cats hit .424 in the second game and posted 20 kills in the third set. Across the two frames, K-State hit .378 and was led by redshirt freshman Peyton Williams, who had nine of her team-best 14 kills in the two sets while hitting .412.

Williams’ 14 kills set a career high and paced a quartet of Wildcats in double-figure kills. The Topeka native was also the team leader in attack efficiency at .462 (14k-2e-26ta). Senior Bryna Vogel and junior Alyssa Schultejans each added 13 kills while redshirt junior outside hitter Kylee Zumach turned in 10.

“I think she gets better with every match,” Fritz said of Williams. “She’s just a very, very fast learner. The more she plays and the more opportunities she has, the more comfortable she gets and the faster she improves. She’s becoming a bigger and bigger part of our offense with every match.”

The Cats ended the second set on a 6-1 run, helping erase a one-point deficit, to claim a 25-21 set win. K-State used an 11-1 spurt to open a five-point advantage midway through Set 3 for a two-sets-to-one lead.

“We played our hearts out, that’s for sure. We really wanted that one,” Williams said. “Our energy was amazing. It’s not hard with a crowd like that, to be honest. We had the mentality of one point at a time. We set little small goals we tried to get to and that’s what helped.”

Following K-State’s 2-1 match lead, KU answered by hitting .333 or better in the match’s final two sets, including a match-high .433 (17k-4e-30ta) in the fourth. A 6-1 Jayhawk run midway through the fourth game turned a one-point lead into a six-point edge and KU’s lead swelled from there, ending with a 25-15 set victory.

Defensively, Vogel led the Cats with 15 digs for her fifth double-double of the season. Junior libero Reilly Killeen finished with 12. Setters Sarah Dixon and Brooke Smith handed out 32 and 22 assists, respectively.

K-State travels to Austin for its third conference matchup, a meeting with Texas on Saturday, September 30 at Gregory Gymnasium. The match with the Longhorns will air on the Longhorn Network. Fans can also listen to Rob Voelker call the action on KMAN 1350 AM, 93.3 AM and streaming live on k-statesports.com.