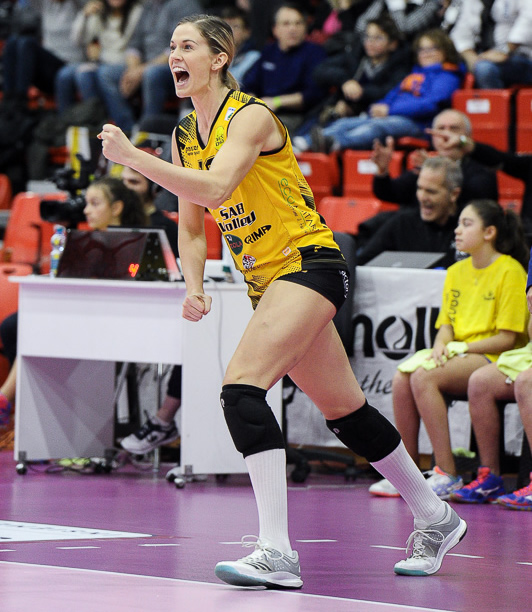 With facing financial issues within the club, SAB Volley Legnano has been unable to pay their players, to which, American Annie Drews has terminated her contract with the team. Current Photo via SAB Volley Legnano

Amid facing financial issues within the club, SAB Volley Legnano has struggled to pay their players, to which, American Annie Drews has terminated her contract with the team. With this, Drews now becomes a free agent and will be looking for a new team to compete with for the remainder of the season.

This season, Legnano is ranked ninth in the league with a 3-6 overall record, putting them right on the cusp of not making the playoff of the league if they do not approve.

Drews has made her breakout year in volleyball this season after being selected to play with Team USA this summer. The thought was put into Drews’ head in 2016 when her and Karch Kiraly spoke on the phone about the possibility to train, but the reality didn’t come true until she received a call this spring. Drews helped her Puerto Rican club team, Caquas Criollas to the league title and MVP honors before being sent off to compete in various competition around the world for Team USA.

Her Team USA journey began with the Pan American Cup in Peru, followed by the World Grand Prix in China and then to Japan to compete in the World Grand Champions Cup. This was all in the leadup to Drews heading off to Italy to compete with SAB.

SAV Volley Legnano is not the only club that has been fighting financial problems, as Russian club, Dinamo Krasnodar has in large stretches in the past year or two been in financial turmoil that has forced them to not be able to pay their players for months on end.