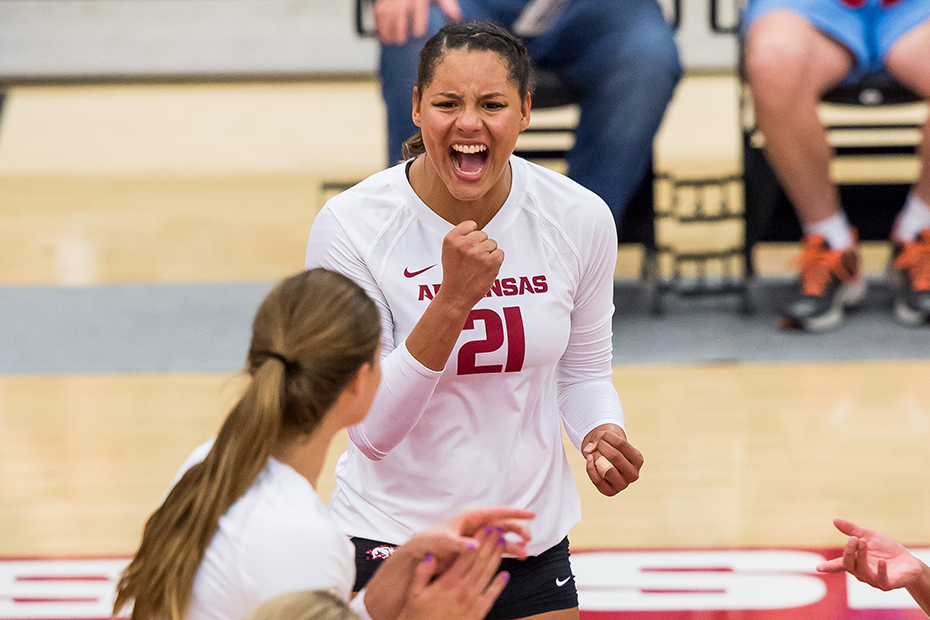 Arkansas outside hitter Pilar Victoria logged 34 of her 74 kills on the week in one match en route to SEC Player of the Week. Archive Photo via Arkansas Athletics/Volleyball

After redshirting in 2016 with an injury, Arkansas fifth-year senior outside hitter Pilar Victoria made her presence known in returning to the court as she claimed the week two SEC Player of the Week award.

Arkansas underwent a rare down year in 2016 as Victoria was injured, but now with her back it’s no surprise the team has gotten off to a strong start at 5-1. Part of that was from a 2-1 stretch last week with the only loss coming to a top-10 opponent in Wisconsin. In total, Victoria notched a whopping 6.73 kills per set on a .381 hitting percentage en route to all-tournament honors at the K-State Invitational. Her high-water mark came against host Kansas State in a five-set match as she logged a 2017 SEC-high 34 kills. Beyond winning SEC Player of the Week, Victoria’s performance won her the conference’s Offensive Player of the Week as well.

Junior libero Quincey Gary took home the SEC Defensive Player of the Week honors as she posted 5.83 digs per set and was named to the Jaguar Invitational All-Tournament Team as she logged 30+ digs in two of her team’s three matches. Her play helped the Crimson Tide post a winning record of 2-1 this past week.

A pair of Bulldogs round out the rest of the awards in Donovan, the SEC Setter of the Week, and Glover, the conference’s Freshman of the Week. As Georgia went 2-1 over the weekend at the Bobcat Invitational, Donovan led the offense to a .279 team hitting percentage behind her 13.20 assists per set. Glover meanwhile patrolled the defense with 53 digs (5.30 per set) and double-digit digs in every match.