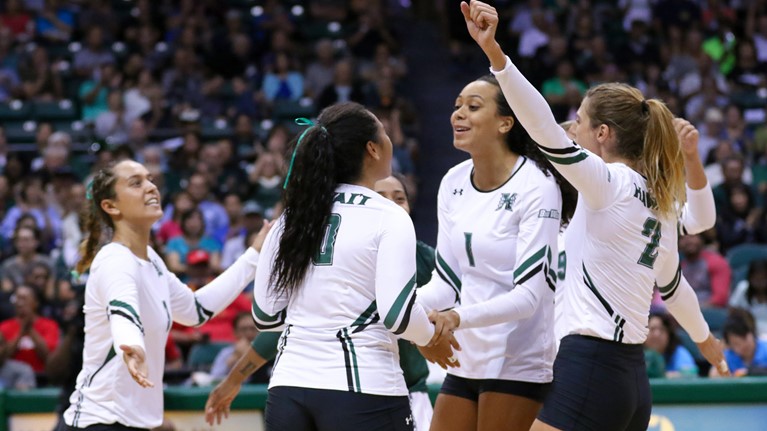 (RV) Hawaii took down Northern Arizona in sweep fashion as they won each set by double-digits. Archive Photo via Hawaii Athletics

Honolulu, Hawaii – Playing in front of a home crowd, the Rainbow Wahine dominated Northern Arizona in a sweep where they outscored the opposition 75-38.

From there, Northern Arizona had no other player above three kills while Hawaii had more balance with Casey Castillo and Kendra Koelsch at eight and seven kills respectively.

Defensively, Savanah Kahakai led the Bows with 17 digs as Norene Iosia was second with 11, giving her a double-double to pair with 24 assists. Maglio also had a match-high five blocks.

The win for Hawaii puts them over .500 at 6-5, a big mark for the non-conference after an 0-3 start fueled by a rugged schedule. Now, playing in the Big West with more experience they can try and rack up more wins.

That schedule in the Big West kicks off on Friday against an upstart UC Irvine team as both of these schools now gear up for conference play. Northern Arizona on the other hand faces Northern Colorado in their Big Sky opener on Thursday.

HONOLULU—The University of Hawai’i women’s volleyball team (6-5) went over the .500 mark for the first time this season with its fourth-straight win. Hawai’i earned its second sweep over Northern Arizona (4-7) in as many nights pulling away to win, 25-14, 25-12, 25-12. Emily Maglio led Hawai’i with a match-high 11 kills and five blocks while Savanah Kahakai recorded a match-high 17 digs on Saturday night at the Stan Sheriff Center.

Maglio filled the stat line, hitting .364 with three errors in 22 attacks. She also posted a service ace and two digs. She was in on five of the team’s seven blocks.

Sophomore setter Norene Iosia and junior setter Faith Ma’afala distributed the offense around with 10 different players posting  kills for the Rainbow Wahine while hitting .288 as a team. UH held NAU to just a .075 team hitting percentage. Iosia notched her team-best seventh double-double of the season with 24 assists and 11 digs while also having a hand in two blocks. Ma’afala came in relief of Iosia and tallied eight assists and two digs.

Sophomore outside hitter McKenna Ross had a career high 10 kills to go with nine digs, two blocks (one solo) and one service ace.

The Lumberjacks lost the first set 25-13, a one-point improvement from the previous match. Senior defensive specialist Clare-Marie Anderson led the Rainbow Wahine to an impressive start behind the service line with a six-point run early on to give the ‘Bows a quick 7-2 lead. Later behind the serving of senior Gianna Guinasso on four straight points, UH extended its lead to 14-3 and never looked back.

NAU kept it closer in the second set, battling the ‘Bows with five ties and three lead changes early. A service ace by Ross would bring the Rainbow Wahine lead to four points at 14-10. But UH finished on an 11-to-1 run to take the second set 25-12

The Bows would complete the sweep against NAU winning the third set 25-12. Hawai’i scored in bunches throughout the frame and put the match away with Maglio serving three points and freshman Rika Okinoending the match on her first career service ace that tickled the tape and fell on NAU’s side of the net.

The Lumberjacks were again led by junior outside hitter Kaylie Jorgenson with 10 kills, six digs, and a block. Sophomore middle hitter Abby Akin led the team with four blocks.

Prior to tonight’s match, the Rainbow Wahine’s annual Alumnae Game took place with over 30 alums participating. The White Team came back to defeat the Green Team, 20-25, 25-10, 11-8. Head coach Robyn Ah Mow-Santos and director of volleyball operations Aven Lee played on opposing teams while assistant coach Angelica Ljungqvist also served as a a coach for the Green squad. Tai Manu-Olevao led all players with 12 kills.

The Rainbow Wahine will open Big West Conference play next week with UC Irvine on Sept. 22 and UC Davis on Sept. 23 at 7:00 p.m.

HONOLULU, Hawaii – The Northern Arizona volleyball team stepped up in their second showing of the weekend versus Hawai’i, but could not overcome a series of big runs by the home team in an eventual 25-14, 25-12, 25-12 loss to the reigning Big West Champions Saturday night.

The Lumberjacks were victims to runs of 9-2 (first set), 14-2 (second set) and 11-3 (third set), but otherwise showed vast improvement from the night before. Hawai’i hit nearly a 100 points lower and saw its ace total sliced in half, leading to NAU’s increased dig and block totals.

“Our overall level of play was significantly better tonight,” said head coach Ken Murphy. “We received serve better, we defended better and we really impacted the match in ways that we couldn’t yesterday. I was proud of our turnaround.”

Just like the night before, NAU found itself in a big hole to open the match with Hawai’i racing out to a 9-2 advantage before the Lumberjacks called a timeout. Although redshirt junior Kaylie Jorgenson got into an offensive groove late in the set – she had four first set kills – NAU was never able to recover from its early deficit. Still, the Rainbow Wahine only hit .220 – lower than any of Friday’s three sets.

Locked into the tightest set of the weekend, Hawai’i ripped the second set away from NAU by scoring 14 of the final 16 points heading into the intermission. However, the set two score did not tell the whole story as NAU trailed just 11-10 and was knotted up with Hawai’i on five occasions before the Rainbow Wahine’s roll. Spurred by sophomore Abby Akin, the ‘Jacks recorded three early blocks to spark the Blue & Gold.

Even with Jorgenson putting down five kills in the third set, NAU could not prevent the sweep despite another strong start. Following freshman Heaven Harris‘ kill off the Hawai’i block which brought NAU within 8-5, the Rainbow Wahine doubled their lead to 14-8 prompting a Lumberjack timeout. Redshirt sophomore Victoria Ewalefoand redshirt freshman Kasie Gilfert combined for a block out of the stoppage, but NAU could not get closer than five the rest of the way.

NAU, now 4-7 overall, will now take on the Big Sky portion of its schedule starting next Thursday, Sept. 21 at home versus Northern Colorado at 7 p.m.

“The quality of competition and the adversity we’ve already faced has helped our team become so resilient,” Murphy said. “We’re learning what we’re capable of and the consistent effort we’re going to need to have to have the success we want. This team is so excited for the start of conference and applying what we’ve learned so far.”