The latest VolleyMob Pod has a loaded cast with Nebraska head coach John Cook and Maria Taylor of ESPN. 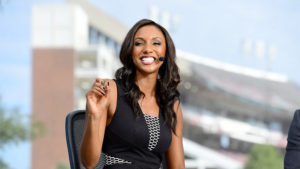 Maria Taylor (above) was a four-year All-SEC play at Georgia.

Maria Taylor is a former volleyball player at the University of Georgia. She retired from volleyball after her college career and now works as the host and analyst for multiple sports at ESPN and SEC Network.

After a successful four year career at Centennial High School, Taylor attended University of Georgia in 2005 where she was the member of both, the volleyball and basketball teams. Taylor finished her career at UGA in the fall of 2008 and was ranked fourth all-time in career kills and total points. She was named to the All-SEC Second Team her junior and senior years. Before her final season with the Dawgs, Taylor helped Team U.S. National A2 Blue Team to finish third at the Open Division of USA Volleyball Championships.

Currently, Taylor works at the SEC Network and ESPN where she is the host and analyst for college football, volleyball and basketball. She started at the SEC Network in 2014 after hosting the IMG College at the University of Georgia.