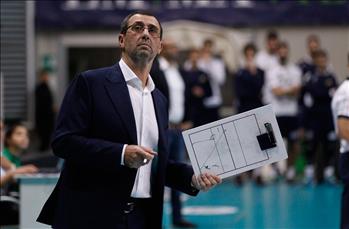 Bruno Bagnoli resigned his coaching duties from Emma Vallas Siena's following a loss to Messaggerie Bacco Catania in the Serie A2.  Current Photo via legavolley.it

Bruno Bagnoli resigned his coaching duties from Emma Vallas Siena’s following a loss to Messaggerie Bacco Catania in the Serie A2.

Set out to replace Bagnoli of his duties are Argentine Juan Manuel Cichello. Cichello previously helped Exprivia Molfetta in their final year of Serie A2 and their promotion to Serie A1 in 2012/13. In addition, Cichello was mentored by Julian Velasco the Iranian national team coach from 2011 to 2014.

The first team of the team with their new coach, they will face off against Maury’s Italiana Assicurazioni Tuscania in the Del Monte Coppa Italia Serie A2. They will pick up the second half of Serie A2 play with Acqua Fonteviva Massa on December 3.

Siena started off their season with three wins, not losing a match until the fifth round. Bagnoli left the program with a 6-4 record on the year.