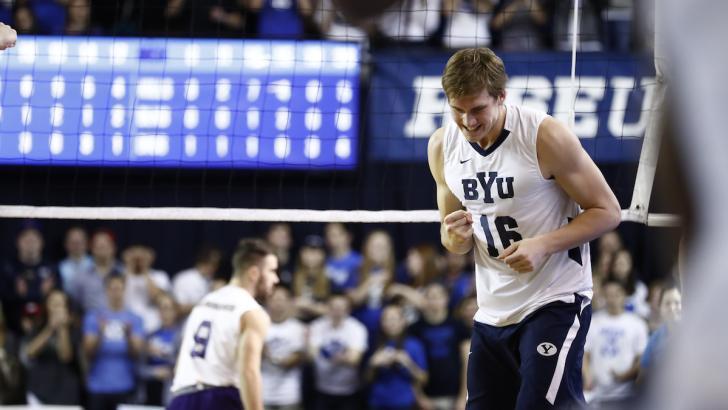 BYU moves on to the NCAA Championship match with a three-set sweep over MPSF rivals Long Beach State. Current Photo via BYU Photo

Both teams started the first set riddled with errors, but it came down to who made the least amount, BYU. Long Beach State made 14 errors, seven hitting and seven serving, while BYU only committed 10 errors five on both hitting and serving.

The Cougars were led by Brenden Sanders with six kills on six swings for an unblemished hitting percentage in the first set. For the 49ers, TJ DeFalco, the AVCA Division I-II Player of the Year, struggled in the first set, with three kills on eights swing with four errors for a low -.125 hitting clip.

BYU was able to hold Long Beach State to a low .083 hitting percentage, while the Cougars hit for .286 in the first.

The Cougars kept their momentum rolling into the second set, with Jake Langlois coming out early with three straight service aces, giving them a lead that the 49ers could not match. Sanders added another five kills in the second set for BYU.

DeFalco woke up in the second set, but it was not enough to propel the team to any sort of improvement, as he put down five kills in the second with no errors.

The set was better overall for the 49ers as they brought their hitting percentage up to .381 in the second, but BYU did even better with a .591 hitting clip.

The third set seemed to go all Long Beach State, as they carried a four-point lead most of the set, holding a late 19-15 lead. BYU fought back to tie the match up at 22-22, then again at 23-23. A service ace and Sander kill ended the 49ers hope of making to the finals with a 25-23 BYU third set win and sweep.

The Cougars are headed to the National Championship ?#GoCougs #BYUMVB pic.twitter.com/e2PSCIj9Md

To lead BYU was Sanders with a match-best 15 kills on a .619 hitting clip, adding one ace and four digs. Tim Dobbert woke up late in the match to add another 11 kills for the Cougars on a .474 hitting percentage with three digs. Langlois contributed seven kills a match-best four service aces and four digs.

DeFalco led the 49ers with 12 kills, three aces, two digs and two blocks while Kyle Ensing put down another 12 kills.

BYU will face the winner of the Ohio State/Hawaii match to try their hand again at a national title. Last season, BYU and Ohio State faced off in the final dance, but the Buckeyes came out on top.