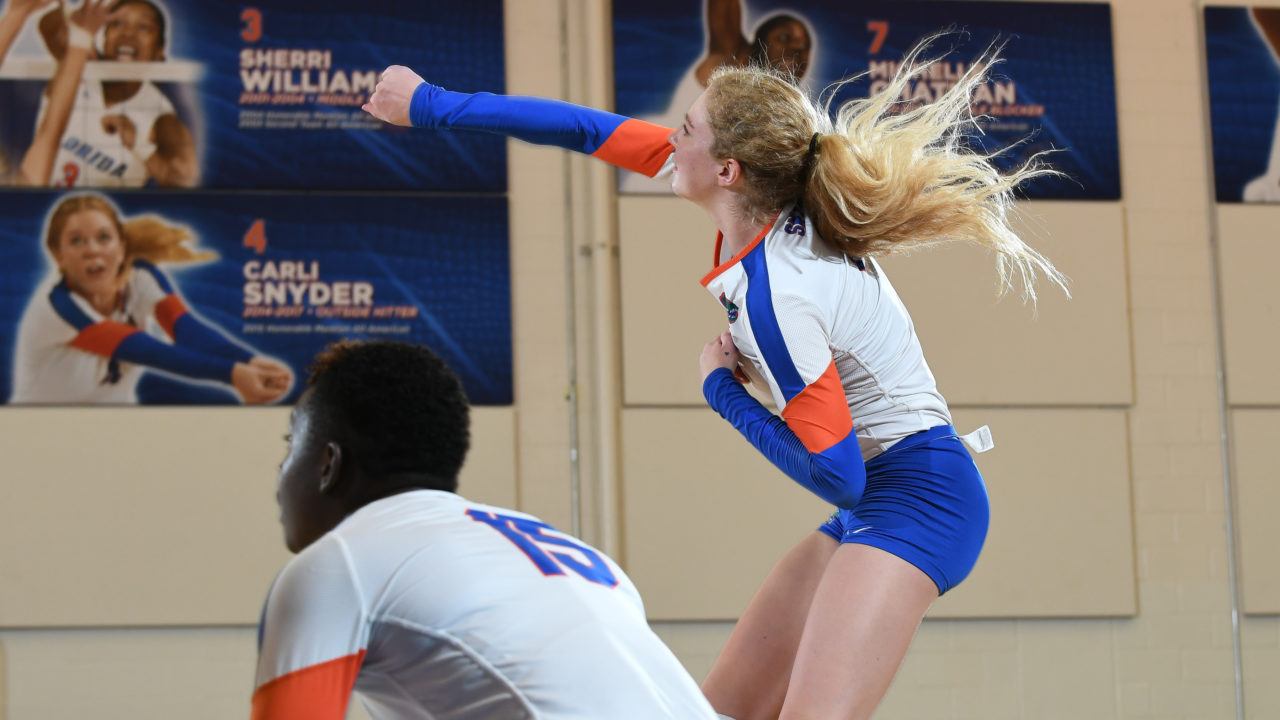 Although Texas is the number one ranked team, it was a different type of ace that hurt the Longhorns as Carli Snyder led Florida to an upset of the AVCA's top team. Archive Photo via UAA Communications photo by Jim Burgess

Gainesville, Florida – Florida pulled off the upset of the top-ranked preseason team in the Texas Longhorns in front of a massive crowd on their home court.

Neither offense posted stellar numbers, but it was Florida’s advantage in the pass and serve game that led them to the victory. No one was more indicative of that advantage than senior All-American Carli Snyder, who posted a match-high six aces and 14 kills. Snyder was strong all-around, as she was one of two players with a double-double and tied for second among both teams with 20 digs.

The blocks were farely even, with Texas holding a 12-11 edge. The biggest difference came from the aspects that Snyder excelled at – passing and reception, in the form of digs (79-66 in favor of Florida), and strong serving (10-3 in aces in favor of Florida).

One noticeable difference for Texas was the absence of 2016 AVCA First-Team All-American Micaya White in the final sets of action after she left the match early on with what appeared to be some sort of injury. In the limited time she saw in the first two sets, she looked out of sorts with more errors (six) than kills (5) and a -0.059 hitting percentage. Without her for stretches, and with her struggling at other times, Texas hit just .156 in the match – although Florida hit just .164.

After Texas was riddled with errors in the first set, they played a more clean game in the second. Florida, who returns five starters and the libero (with three of those six earning AVCA All-America status in 2016) were still able to counteract what the Longhorns did well for a 2-0 set lead. After Texas won its first set of the season, Florida got up 24-17 and finally put away Texas after the Longhorns hit a 4-0 run to tighten the final set.

Beyond Snyder’s strong day, the front line of Florida was very active – both on offense and in tipping, blocking or just mentally affecting the Longhorn’s offense. 6’8″ middle blocker Rachael Kramer and senior All-American middle blocker Rhamat Alhassan combined for 20 kills (on a .341 hitting %) and 11 blocks. All-American senior libero Caroline Knop was also a factor on both ends as she netted a match-best 22 digs to go with her seven assists.

Freshman phenom Lexi Sun led Texas with 11 kills in her first match to go with 10 digs and a pair of blocks. She did have some ups-and-downs though as she logged nine attack errors. Fellow freshman Ashley Shook took over setter duties for Texas and had 33 assists and 10 digs, helping to feed Ebony Nwanebu (nine kills, .500 hitting %, six blocks) and Chiaka Ogbogu, who had eight kills (.280) and six blocks in her first action since 2015.

Of course Texas lost in this event last season to Nebraska early in the year and still had a strong season, but this match definitely showed the Longhorns still have some weaknesses in the pass/reception/serve game while it also showed how good Florida can be. Still, it’s just match number one and Texas was without a player of the year candidate for most of the match on the road.

Up next, Florida hosts Nebraska, who were just upset by Oregon with All-American setter Kelly Hunter mending an injury. The Gators look for win number two against a top-five team while Texas looks for win number one in general against #18 Oregon, who already scored a top-five victory over Nebraska yesterday.

Shook finished with a team-high 33 assists, while also recording one service ace along with sophomore Claire Hahn.

Texas began the match with a Chiaka Ogbogu kill to give the Longhorns an opening 3-1 lead, with the teams then trading points until a 6-2 scoring run for Florida gave the Gators a 19-15 lead. With Texas unable to reduce the deficit, Florida closed out the first set, 25-16.

The second set began with Texas battling back against the Gators’ momentum. The teams traded points up to 13-13 until a kill from Shook began a 4-0 run for Texas to 17-13. With the score tied at 23-23, Florida scored on consecutive points to secure the set, 25-23, and take a 2-0 advantage.

Texas responded to Florida taking the first sets with a strong start to the third. With the Longhorns building confidence, Sun, on her eighth, ninth, and tenth kills of the match maintained the Longhorns’ lead at 6-3, 15-9, and 17-12. Not looking back, Texas closed out the set, 25-18, to move back to 1-2.

The opening of the fourth saw Florida start off with a 4-2, as the Gators maintained their lead up to match point at 24-17. Kills from Nwanebu and a block from Ogbogu earned Texas a four-point run and brought the score back to 24-21, but Florida secured a final point to seal the victory for the Gators.