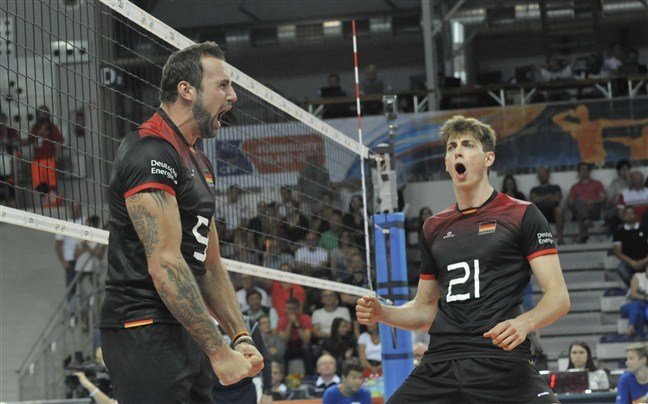 Friday marked the first day of action in Groups B and D at the European Championships. The Czech Republic and Germany outlasted their foes in Pool B, while Turkey and Belgium came out on top in Pool D.  Current Photo via CEV

Friday marked the first day of action in Groups B and D at the European Championships. The Czech Republic and Germany outlasted their foes in Pool B, while Turkey and Belgium came out on top in Pool D.

Hitting errors plagued the Slovakians in a four-set loss to the Czech Republic on Friday. The Slovaks commited 35 miscues, while their foes gave away just 14 points on errors.

“We started with good reception, so we entered the game and the tournament well,” Czech coach Michal Nekola said. “In the second set we made a successful chase, but still we lost our concentration at the end somehow. After the break we got back into the game and won the match, which means we are still in the tournament. This was only the first step. We have many more ahead. It is good that we have a day off tomorrow, because my team need to clear their heads.”

Michal Finger scored 24 points, including 21 kills, to pace the Czechs, while Donovan Dzavoronok added 18 points and Petr Michalek chipped in 13. Dzavoronok downed 12 putaways and put up a team-best three blocks and three aces. Michalek turned in 10 kills and two aces.

The Czechs led Set 1 throughout with help from eight Slovakian errors.

The Slovakians led by as many as six in Set 2 only to have their foes tie it up at 16. The teams then traded points with the Slovaks earning the first chance at the set at 24-23. They had another try at 25-24, but the Czechs tied it up and had three set-point opportunities of their own before falling 30-28.

The Czech Republic rebounded by dominating the third set en route to a nine-point win, capped by a trio of Dzavoronok aces. After trading points early in Set 4, the Czechs gained control and pushed ahead to the eight-point lead to close out the match, clinching the victory on a another error.

Gyorgy Grozer downed 28 points, with a match-high 20 kills, four aces and four blocks to lift Germany to a five-set win over Italy.

“The serving and the blocking were our key factors to win the game,” German captain Lukas Kampa said. “There were some moments of crisis, but overall it was a perfect teamwork. Now we have to sleep well and recover before the match against the Czechs.”

After a back-and-forth battle in Set 1, the Germans hung on for the 25-22 win clinched by a Simon Hirsch ace.

The Germans rebounded to dominate the final two stanza and steal away the five-set win. In Set 4, Grozer and Kaliberda excelled offensively to lift the Germans to a 25-19 win and force a tiebreak.

In the fifth, the Germans had a leg up form the start and rode Grozer’s offense and block to a 15-8 win win over the Italians, which won the 2015 Euro bronze medal.

“I think it was a good match,” Italy’s Matteo Piano said. “Germany played better at the end, and it was the only difference between us that gave them the victory. On the paper, the rest of this group seems to be easier to play against, but neither Slovakia nor the Czech Republic have to deal with such pressure as we do.”

Turkey dominated the block (11-6) and hit at a 60 percent efficiency in a four-set win over the Netherlands to open Pool D action on Friday.

“I think that Turkey played a really good, aggressive game,” Netherlands coach Gido Vermeulen said. “One of the elements they dominated over us was their attack, which they executed very well.”

The team that led at the second timeout of each set went on to victory.  In the opening set, the Turkish side put up five blocks and hit with a 70 percent efficiency to come back from an 11-8 deficit. In the second, eight Dutch miscues and three aces aided the Turks in the win as the team separated itself from a 15-all tie.

Set 3 saw the Dutch benefit from 11 Turkish miscues, while rallying from down 8-7 to win by four. Turkey rebounded with six blocks in the 25-22 finale victory, although the Netherlands narrowed the gap to one at 19-18 before eventually succombing.

Eighteen Belgian blocks went a long way toward lifting the team to a five-set win over France. The Belgians also had held from 35 French miscues in the victory.

“I’m really happy not only with the win, but also with our performance today,” Belgian coach Vital Heynen said. “Our win is more than a surprise. I think nobody, even we, expected that we can defeat French team – the big favour to regain the title. We won the first set and we felt that we can achieve a good result today, that everything is possible. Today we played well in block and defence. It was a hard and long match so I’m happy that now we have a day off and we can prepare well to the next game against Turkey.”

After trailing throughout Set 1 thanks to 10 miscues, the French led at the midway point of Sets 2-4, holding on for the wins in the second and fourth. The Belgians rebounded by jumping ahead 5-2 in the fifth and carrying on to the 15-12 victory, with help from six French errors.

“Right now medal is very far ahead of us, but it was just the first match,” French coach Laurent Tillie said. “We played with a very good team, which caused us a lot of problems. We lost our rhythm throughout the match and they played with enthusiasm and much more consistency in block. We have to find back our pace. Our situation in pool D is now much more complicated and we have to win on Sunday if we want to think about medal.”