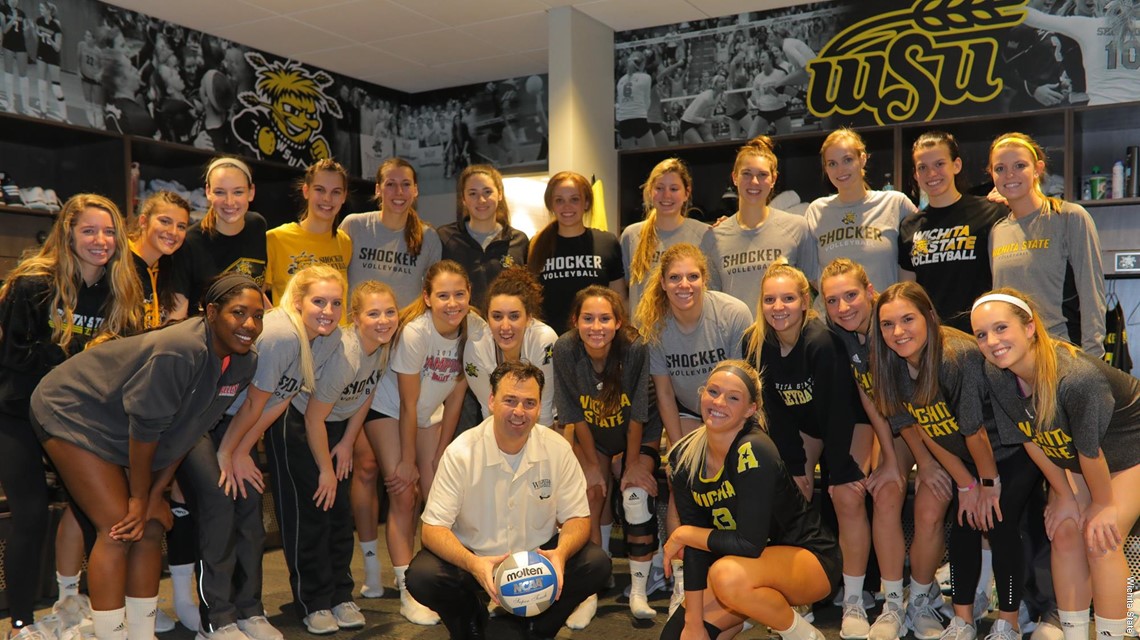 Lamb saw an overall strong match from his squad, as they not only hit .330 with seven players recording a kill on offense but also out-blocked Tulsa 10-3, had more digs (56-38) and held the Golden Hurricanes to a .071 mark.

Abbie Lehman (10 kills, .600, seven blocks, three digs) and Tabitha Brown (10 kills, .280, 10 digs) each reached double-digit kills for Wichita State while Emily Hiebert distributed their kills with 33 total assists to go with an overall match of seven kills, six blocks and five digs. Taylor Horsfall logged 15 digs for Tulsa, but couldn’t slow down the overall balance of the Shockers offense for the match.

The first would be the tightest with 10 ties and four lead changes, but eventually Wichita State pulled it out 26-24. Tulsa actually kept things back and forth in the next two sets very early, but couldn’t hold as 20-5 and 18-5 runs to close out each gave Wichita State a strong 3-0 sweep.

Next up for both schools is week nine. For Wichita State, that means meetings with Cincinnati and East Carolina while Tulsa goes to the road to face Temple and Connecticut.

SET 1:
• The Shockers held on for a 26-24 win in the first set
• A kill by Lehman gave the Shockers a quick 4-2 lead
• The Golden Hurricane came back to take an 11-10 lead
• The Shockers responded with a 3-0 run for a 13-11 lead
• A Tulsa error pushed the Shocker lead to 18-13
• Back-to-back Tulsa kills tied the score at 21
• The two teams traded points until the Shockers used a Tulsa service error and a kill by Emma Wright for the 26-24 win
• Emma Wright, Emily Hiebert and Abbie Lehman each had four kills in the set

NEXT MATCH:
• The Shockers are next in action on Fri., Oct. 20 when they host Cincinnati at 7 p.m. inside Charles Koch Arena

The first set was a back-and-forth battle. With the Shockers leading 10-7, the Golden Hurricane went on a 4-0 run and took an 11-10 lead. Wichita State answered with three unanswered points to regain the lead, 13-11. With the Shockers up 19-14, the Hurricane fought back with a 3-0 run to pull within one, 19-18. Tulsa added another 3-0 run two points later and took a 22-21 lead. Wichita State took the first set, 26-24. Rachel Moore led the Tulsa attack with four kills, Emily Hubbard added three kills. Mariah Pardo assisted on 10 kills. Taylor Horsfall collected six digs.

Thorson led the offense in the third set with three kills, Cook and Moore added two kills each. Pardo collected seven assists. Horsfall scooped up seven digs. Thorson, Hubbard and Pardo all tallied four digs each, in the third. The Shockers won the set, 25-12.

Wichita State had 56 digs, 42 kills, 39 assists, and 10 total blocks. Abbie Lehman and Tabitha Brown each had 10 kills each to lead the Shockers. Emily Hiebert went for 33 assists. Giorgia Civita led the Shocker defense with 15 digs.

With the loss, Tulsa falls to 9-11 overall and 3-5 in the American Athletic Conference. The Golden Hurricane will take to the road next weekend as it battles Temple, on Friday, Oct. 20. First serve is scheduled for 6 p.m.