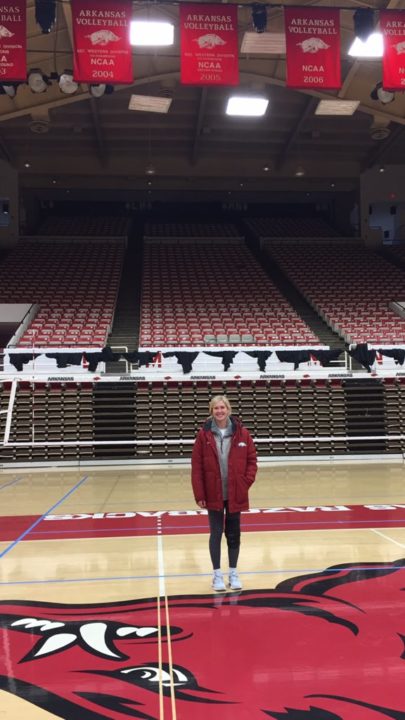 Class of 2018 outside hitter Abby Cheek is headed to Arkansas in the SEC. Archive Photo via Abby Cheek twitter (@abby_cheek_)

Class of 2018 outside hitter Abby Cheek has committed to the University of Arkansas women’s volleyball program. Cheek stands at six-foot-one and is a native of Seguin, Texas.

An attendee of Seguin High School, Cheek helped the Matadors to a 22-16 season in which they went 10-4 in district action. They also made it to the Regional Quarterfinals in the 2017 UIL State Volleyball Championships.

Club wise, Cheek plays with one of the top clubs in Texas and the country in Austin Juniors. Video of her play can be seen below via YouTube:

Arkansas finished the 2017 season with a 19-11 mark playing in the SEC, where they went 9-9 and just missed out on the NCAA Tournament. They had six outside hitters on their roster last season, notably fifth-year senior Pilar Victoria who graduates after one of the top attacking seasons in the country. She will be the only outside hitter who exhausted her collegiate eligibility, as there should be plenty of competition with Cheek in the group.

So excited and blessed to say I have committed to play volleyball at University of Arkansas ?❤️ Go Razorbacks!!!! pic.twitter.com/bgsUdkjU3l