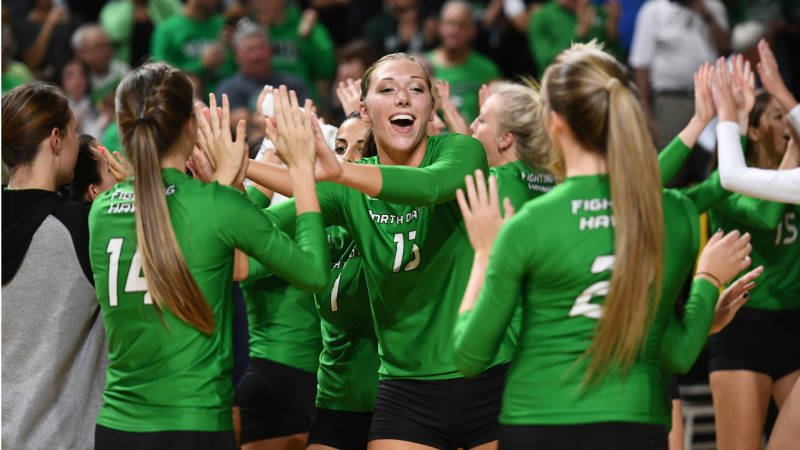 North Dakota is adding a 2019 recruit with the recent commitment of Abbey Bigelow. Archive Photo via Russell Hons for UNDsports.com

State of Minnesota high school recruit Abbey Bigelow has committed to the University of North Dakota as part of the class of 2019. A current junior, Bigelow attends Kasson-Mantorville High School and plays with Southern Minnesota Volleyball on the club side.

Happy to announce my verbal commitment to further my academics and volleyball career at the University of North Dakota! Go Fighting Hawks!! pic.twitter.com/GWS15z33tz

A 6’1″ setter and right side hitter, Bigelow is off to a 14-4 start to her junior season at Kasson-Mantorville High School according to MaxPreps. On the club side she plays for the Rochester Youth Volleyball Association that funnels down to Southern Minnesota Volleyball, which has produced plenty of other collegiate athletes.

So far in 2017, North Dakota has one of the best records in the country as they have compiled 23 wins to just four losses. They are also 8-2 in the Big Sky as they are one of the top competitors in the conference for an automatic bid and an NCAA Tournament appearance.

This year’s roster for North Dakota consists of three setters and two right side hitters. Of the setters, one is a senior while the other two setters and two opposites are sophomores and freshmen. That means that two of the five will be seniors with one graduated by the time Bigelow is set to arrive.