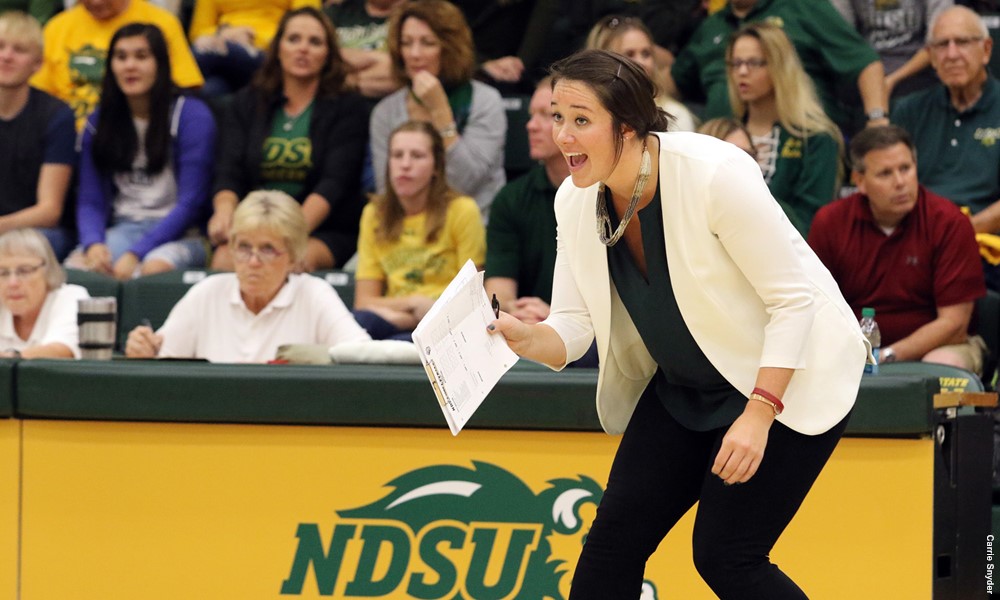 Athletics Director Matt Larsen made Jennifer Lopez the 12th head volleyball coach in Bison history on Monday after she has helped the team to a 15-6 mark thus far in 2017. Current Photo via NDSU Athletics

Back in May, Jennifer Lopez was named the interim head coach for the North Dakota State volleyball program. On Monday, Athletics Director Matt Larsen announced that he was removing the interim tag and making Lopez the 12th head volleyball coach in Bison history after she had helped the team to a 15-6 mark thus far in 2017.

Lopez has a long history with the NDSU program, earning Summit League Setter and Player of the Year and Tournament MVP honors as a senior for the Bison in 2011, capping a four-year playing career. The Glyndon, Minnesota, native garnered three All-Summit League honors while helping the program to four regular season league titles and three NCAA Tournament appearances.

Since graduating, Lopez had spent two years in the high school ranks before returning to NDSU in April 2015 and acted as an assistant coach for two years before picking up the interim title.

“During her time as the interim coach over the last five months, Jennifer has demonstrated the ability to lead the volleyball program in every aspect: team preparation, culture, teaching, recruiting, game management, and all other operational aspects of the volleyball program,” Larsen said. “In addition to this, Jennifer exhibits great character, is a role model to her student-athletes, is an incredible competitor, has set high expectations for the program, and most importantly, has created an environment where the young women in the program can grow, learn, make mistakes and enjoy their volleyball experience. I had a strong feeling we had our coach when we named her interim, but the last five months have proven she is incredibly capable to lead our program well into the future.”

Lopez took over for Kari Thompson, whose contract was not renewed after the 2016 season.

“I am extremely honored and humbled to be able to be a part of a program that means so much to me, and I look forward to continuing a level of excellence that is Bison Volleyball,” Lopez said.

The Bison are set for a pair of road match this week at Oral Roberts and at Denver on Friday and Sunday respectively.