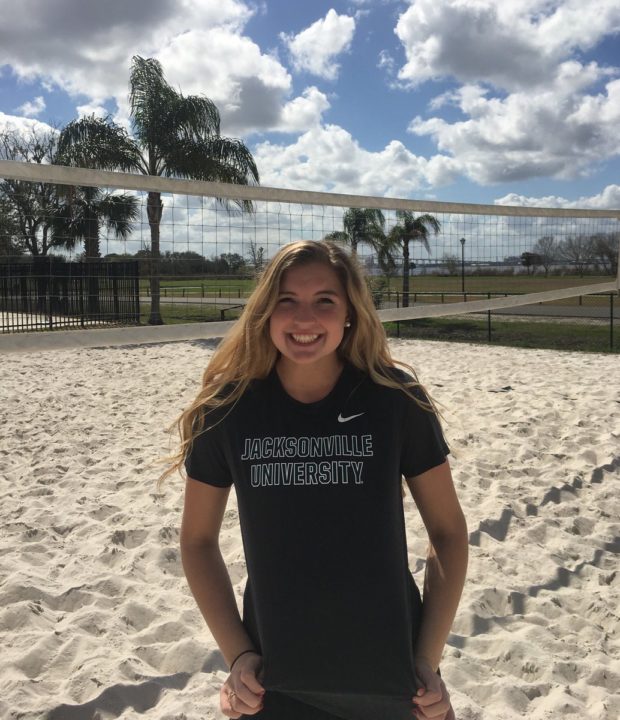 Class of 2019 recruit Grace Davis has committed to the Jacksonville University women’s volleyball program to play both indoors and on the beach. Standing at 5’9″, Davis can play outside hitter, right side and defensive specialist/libero.

An junior at Olentangy Liberty High School in Powell, Ohio, Davis helped the Patriots to a 23-2 season in which they went 9-1 in conference play. Individually, she notched 128 kills (1.9 per set) on a .226 hitting percentage, 33 blocks (0.5 per set) and 29 digs (0.4 per set) according to her MaxPreps page. She posted similar numbers as a sophomore in 2016.

On the club side, Davis plays with Elite Volleyball Club – specifically Elite 17 Black. Her recruiting profile with videos of her play with the team can be seen here.

Last season Jacksonville went 18-10 overall and 12-2 in Atlantic Sun before falling in the league’s tournament semifinals. The 2017 roster featured three liberos/defensive specialists, four outside hitters and one right side. Of that group, three graduate prior to 2018 with none set to be seniors in the fall.

Beyond excited to announce I have verbally committed to Jacksonville University to play both indoor and beach volleyball at the division one level. Thank you to everyone who helped me get here and go dolphins?? pic.twitter.com/J8gzu7DyCz