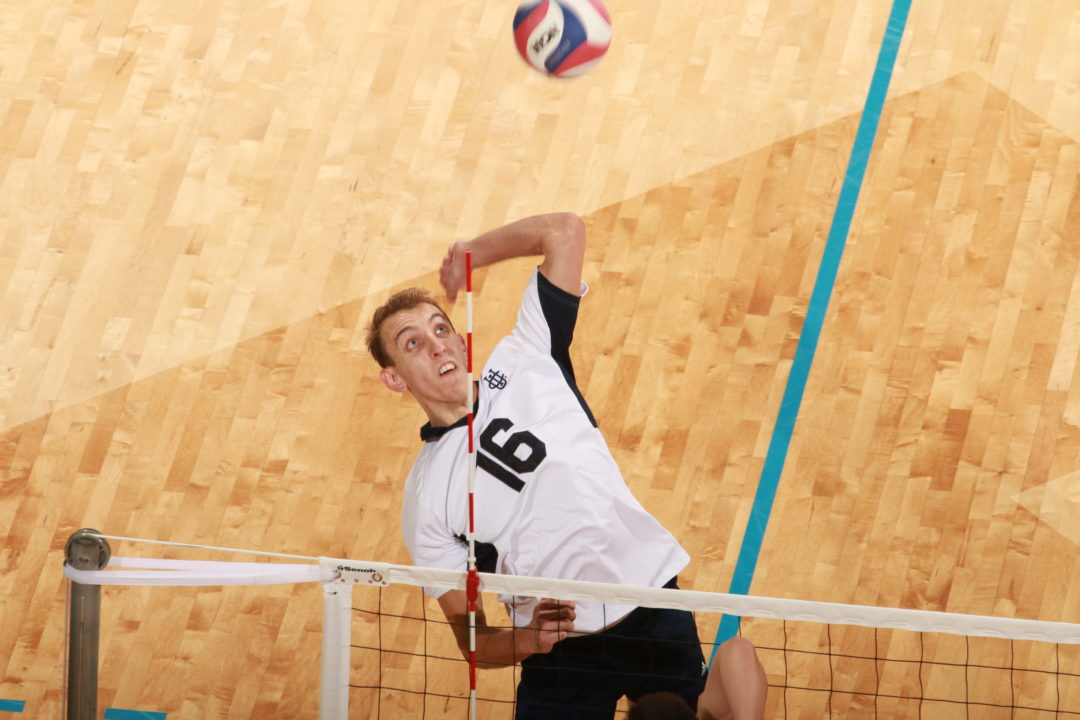 Apfelbach finished just shy of his career-high with an impressive attack line of 24-4-40, hitting .500 on the night. He also added a match-high 11 digs for his second double-double of the season. He was assisted by Aaron Koubi with 16 kills, also on .500 hitting. Setter Dante Chakravorti ran the amazingly efficient attack (.435) with 52 assists. The .435 hitting percentage is UCI’s third best all season. Chakravorti also blocked a team-high-tying 3 blocks, recording the team’s only solo block in the process. Austin Wilmot also blocked 3 Hawai’i attacks.

Hawai’i was led offensively by Stijn van Tilburg, who tied his career-high with 27 kills and hit 458 on the evening. The only other time he had 27 kills was also against UCI in 2016. He was joined by Rado Parapunov with 12 kills, hitting .333 and adding 3 blocks on defense. Setter Joe Worsley ran an efficient offense (.397) with 52 assists. Patrick Gasman finished with a match-high 4 blocks. Libero Larry Tuileta finished with a match-high-tying 11 digs.

Despite the loss, Hawai’i wins the inaugural Pineapple/Orange Crate, given to the winner of the UH/UCI series. Even though they split four-set wins, UH wins by virtue of scoring 13 more points than UCI.

Apfelbach put away 24 kills, one shy of his career-high and hit .500 (24-4-40). He recorded his second double-double of the season with a match-high 11 digs. The lefty also added two aces and two block assists.

Setter Dante Chakravorti ran the explosive Anteater attack with UCI’s .435 hitting percentage coming in as third highest this season. The junior recorded 52 set assists which are tied for his second most this year.

UCI snaps a three match losing streak and goes to 11-4 overall and 1-1 in the Big West. The Anteaters snapped Hawaii’s home conference win streak at 14 matches. The Rainbow Warriors are 9-2 overall and also 1-1 on the conference’s opening weekend.

Hawaii did not have a service ace on the night, the first time this season an opponent has gone without a service winner.

UCI made the first move in the second set on kills by Scott Stadick and Karl Apfelbach, 7-5. An 8-2 run, which included three more Apfelbach kills opened a 19-13 advantage for the Anteaters. UCI would win the set 25-18, hitting a blistering .720 (19-1-25). Apfelbach knocked down 11 kills in the set.

Three consecutive kills by Hawaii broke a 7-7 tie in the third set and forced an Anteater timeout. UCI returned the favor using points from kills by Stadick and Joel Schneidmiller and a solo block by Dante Chakravorti to knot the score again at 10-10. A UCI service error paired with a kill by Stijn van Tilburg gave Hawaii a 19-16 advantage. Trailing 21-19, Aaron Koubi put away a pair of kills to tie the set at 21 all. A kill by Apfelbach and a Warrior attack that went in to the net gave UCI its first lead of the set, 24-23. Following a Hawaii timeout, Stadick put down the set winner for the come-from-behind 25-23 victory.

In the fourth set, an Anteater service error and another van Tilburg kill gave Hawaii the slight 11-9 lead. UCI used consecutive Warrior errors to tie it up at 12-12. UCI scored four in a row on a Hawaii service and attack error, a kill by Koubi and an ace by Schneidmiller to take an 19-16 lead. A kill by Koubi and a Hawaii attack error gave UCI set point 24-20. After a two point delay, a Rainbow Warrior service error gave UCI the 25-22 win and the match 3-1.

NOTES: UCI’s second set hitting percentage of .720 (19-1-25) was the highest of the season…the 19 kills in the set is the most in a set this year…It is Apfelbach’s ninth consecutive double-figure kill performance…He has posted 20 or more kills three times this year…The teams started a new tradition with the teams playing for The Pineapple Orange Crate…The teams split a pair of matches and tied in sets so points was the determining factor giving Hawaii the inaugural prize with a +13 point differential.

However, by virtue of a tie-breaker, the Rainbow Warriors (9-2, 1-1 BWC) captured the inaugural “The Pineapple Orange Crate” which goes to the winner of the UH-UCI series. The Warriors, which won Friday’s match in four sets, out-pointed the Anteaters (11-4, 1-1 BWC), 185-to-172.

Stijn van Tilburg once again led the Warrior attack tying his career-high with 27 kills – also set against the Anteaters in 2016 – hitting .458. For the series, the Amsterdam, Netherlands native tallied 48 kills, averaging 6.00 per set. Rado Parapunov added 12 kills and three blocks.

UH, which saw its home conference win streak snapped at 14 matches, hit .397 for the match, however did not record a single service ace after serving eight on Friday.

Karl Apfelbach had 24 kills to lead the Anteaters, which hit .435.

It was a tight battle through the midway point of Set 1 before the Warriors reeled off five straight – four by UCI hitting errors – for a 19-13 lead. UH would close out the set on a 13-4 run and went on to hit .615 in the frame.

The Anteaters came fighting back in Set 2, taking a 9-6 lead after a 4-1 run. The Eaters stretched their lead to 16-11 after three unanswered. UCI did not commit its first hitting error of the set until its 22nd attempt and finished the game hitting .720.

Early on in Set 3, the teams went back-and-forth, trading a pair of three-point spurts each. UH surged ahead 15-12 at the media timeout before the Anteaters rallied to tie it at 21. The teams traded points until a bad pass by UH led to a hitting error and set point for UCI. On the next play, Scott Stadick put down his sixth kill for the Anteater victory.

UH held the early advantage in Set 4, however, consecutive hitting errors by van Tilburg and Gasman tied the score at 12. The Warriors led 15-14 at the media timeout but the Anteaters responded with four straight points for a 19-16 lead. All the Warriors could do the rest of the way was trade side-outs as UCI took the match.