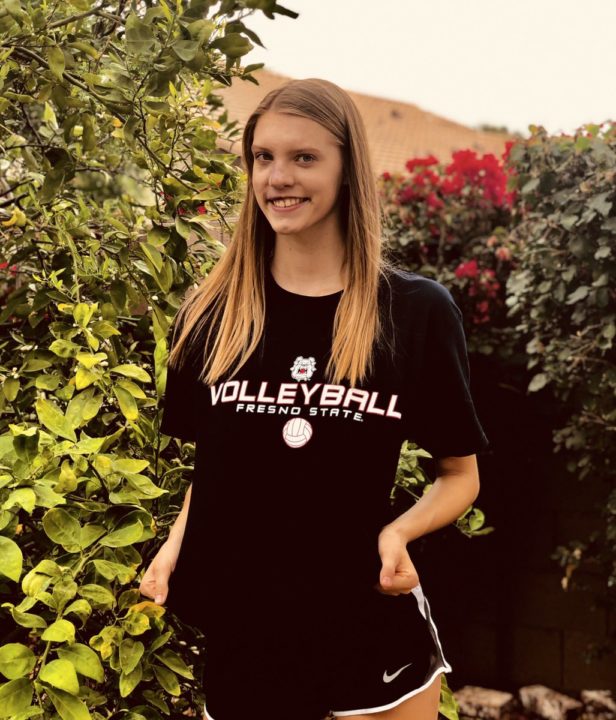 Class of 2019 recruit Grace Doyle has committed to the Fresno State women’s volleyball team. A 6’0″ middle blocker and right side, Doyle will join the Bulldogs for the fall season in 2019.

A junior at Perry High School in Gilbert, Arizona, Doyle helped her school to a 36-7 finish this past season in which they made the state semifinals. Individually, she posted 202 kills (1.7 per set) on a .433 hitting percentage, 110 blocks (0.9 per set) and 49 digs (0.4 per set) according to her MaxPreps profile.

Club wise, Doyle plays with Arizona East Valley Juniors – specifically the 17N1-Tempe squad. Video of her play from last summer can be seen below via YouTube:

Fresno State is coming off of a 12-18 season in which they went 7-11 in Mountain West Conference play. The Bulldogs had two middle blockers on their 2017 roster and zero opposites. Both middles were juniors this past season and will be on their last leg in 2018, clearing up some roster space for Doyle come her first season.

Doyle also represents the second commit for the Bulldogs registered in the VolleyMob recruiting database, joining outside hitter Sydney Lierz from Kansas.

So excited and blessed to announce that I have committed to play division 1 indoor volleyball at Fresno State University in California! Thank you to everyone who helped me through this process! #GoBulldogs pic.twitter.com/CAXbfuUBE2