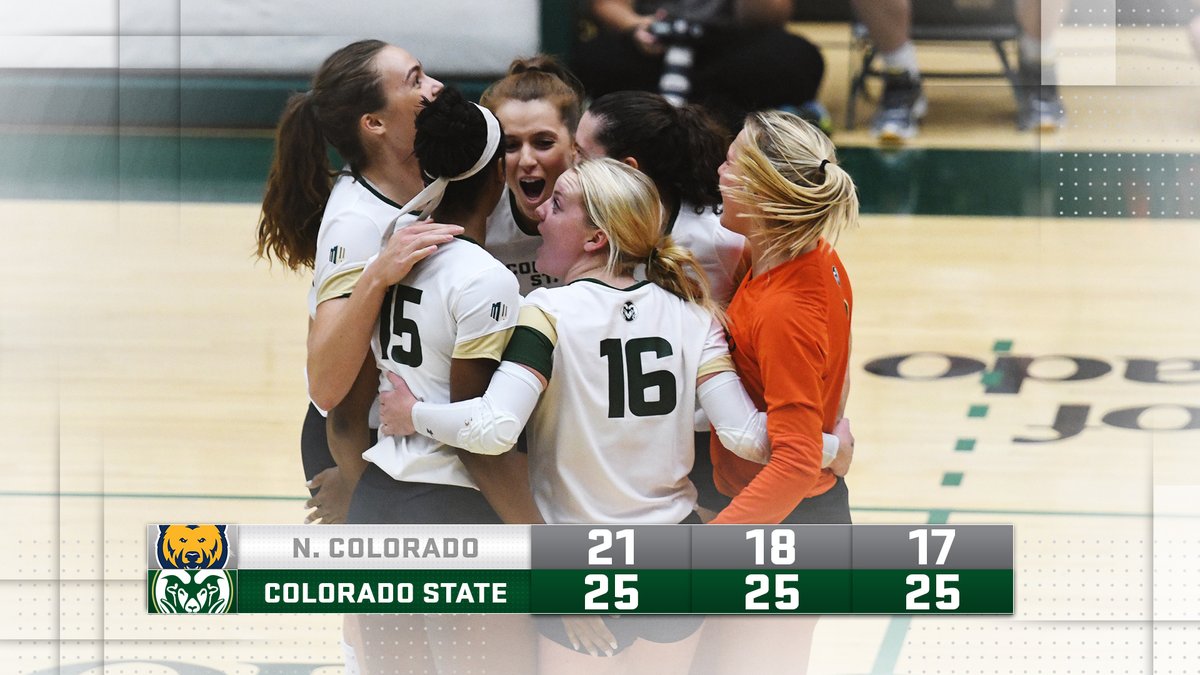 The Rams hit at a .403 clip during the entirety of the match, as they went out with a bang when they hit .520 in the third and final set. The defense was also strong as they held Northern Colorado to a .140 team hitting percentage with help from 10 team blocks.

The attack was well-balanced for Colorado State, as no one player racked up double-figure kills. Instead, five athletes had five or more, led by Kirstie Hillyer‘s nine on a .615 hitting percentage. Sanja Cizmic filled the stat sheet with seven kills on a .429 mark to go with her four digs, three aces and two blocks. Setter Katie Oleksak sparked the offense 32 assists.

The schedule ramps up a bit for Colorado State who is now 2-1. They head to Tallahassee to take on a VolleyMob receiving votes team in TCU in addition to UNC Asheville and #16 Florida State.

Northern Colorado now drops to 0-3 overall as they will face University of San Francisco, North Dakota State and Florida A&M in a tournament next.

FORT COLLINS, Colo. – The Colorado State volleyball team swept passed Northern Colorado Tuesday night in Moby Arena to push its winning streak to 17 straight against the Bears. The Rams haven’t lost to UNC since 1982 and Head Coach Tom Hilbert improves his perfect record to 46-0 against Division I programs in Colorado.

The first set was the closest of the night, as both team hit the ball well but the Rams came out on top, 25-21. In set two, Colorado State’s defense began to show its true colors as it held the Bears to a match-low .032 hitting mark. Following intermission, the Rams kept the pressure on, holding UNC to another low hitting mark of .120, while smashing a match-high .520.

The Rams finished the match hitting .403, while holding the Bears to .140. Colorado State also added seven blocks in the sweep.

CSU (2-1) will hit the road for the first time this season as it heads to Tallahassee for three matches at the Home2Suite Invite hosted by Florida State. The Rams will face TCU, UNC Asheville and Florida State on Friday through Saturday.

IN THEIR WORDS
Tom Hilbert on Sanja Cizmic‘s ability…
“We used Sanja well today. We have had a lot of good right side players in this program. Sanja is one of the best right side hitters this program has ever had. She can take a ball that is set 20 feet away from the net and get a really nice effective swing. So we are going to use that. Every year you look at your players and ask, ‘Who can do what?’ She can certainly do that. We are getting a lot of balls to her. Even in out of system situations.”

Breana Runnels on the team’s passing…
“I think a lot of us overthink when we are passing. It is just a rhythm. Tom always says it is a feeling, so we have just got to find that feeling.”

Sanja Cizmic on how the team responded with the 12 service errors…
“UNC is a really good passing team, so we knew if we wanted to take them out of their system we had to be aggressive. Even though we did have 12 errors, we also had five aces. I feel like the numbers are going to start to even out soon.”