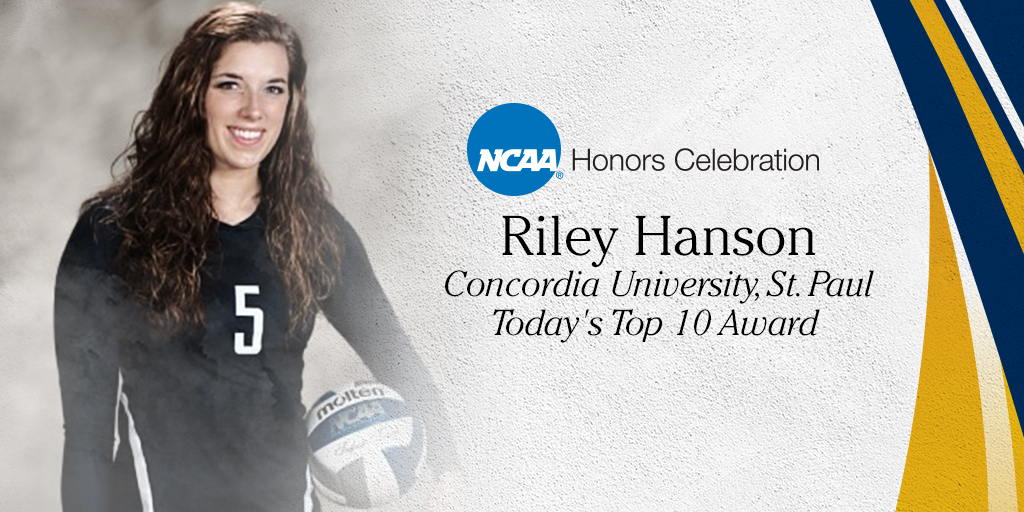 The NCAA has announced their 2018 Today's Top 10 Award winners that honors exceptional former student-athletes in the NCAA.  Current Photo via NCAA

The NCAA has announced their 2018 Today’s Top 10 Award winners that honors exceptional former student-athletes in the NCAA.

The award highlights student-athletes that completed their athletic eligibility during the 2016-17 season and recognizes their success on the field, in the classroom and in the community. The recipients will be honored at the Honors Celebration on January 17 during the NCAA Convention that will be held in Indianapolis, Indiana.

For the volleyball community, NCAA Division II’s Concordia-St. Paul’s Riley Hanson has been named a recipient of the award. Hanson was a two-time Female Athlete of the Year at Concordia and helped lead the Golden Bears to two national titles in 2013 and 2016. Additionally, Hanson earned three AVCA All-America honors and four NSIC All-Conference accolades. Hanson also was a two-time CoSIDA All-America honoree and in 2016 was the CoSIDA Academic All-American of the Year.

This year, Hanson was named the Golden Bears’ Scholar Student-Athlete of the Year along with receiving an NCAA Postgraduate Scholarship.

On the court, Hanson recorded a .402 hitting percentage in her career which led the Golden Bears all-time. She ranks sixth in program history with 1,500 career kills and was third with 444 blocks. In her four years, she helped Concordia to an impressive 126-16 record.

Hanson was a three-year member of the Concordia-St. Paul SAAC while serving as the vice-president during her senior season.

Hanson is the second Golden Bear to receive the award as former teammate was named to the list in 2013.