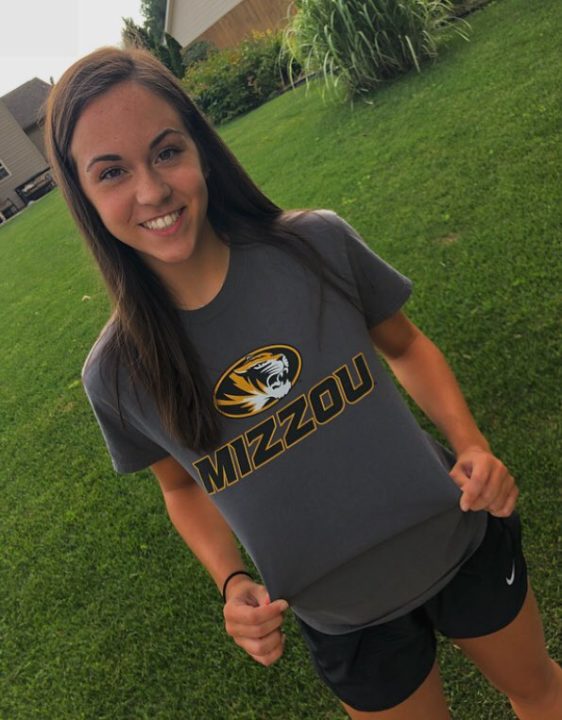 Missouri has bolstered its future back-court with the verbal commitment of 2020 DS/L Emily Brown. Archive Photo via Emily Brown (@emilygb20)

Class of 2020 defensive specialist/libero Emily Brown from Lafayette, Indiana has verbally committed to the University of Missouri women’s volleyball program. Brown was previously committed to Lipscomb, but re-opened her recruitment prior to her club season.

Brown now joins one of her high school teammates, Brooke Humphrey (Michigan), as a Power 5 commitment. The pair helped to lead the McCutcheon High School Mavericks to a 25-6 record in 2017 when Brown – who will be a junior this fall – was a sophomore. That included a trip to the IHSAA Class 4A State Tournament Championship match before they fell to Zionsville.

On the club side of things, Brown plays with Circle City Volleyball Club and the 16 Purple team. She recently helped the team finish fifth in the AAU National Volleyball Junior Championships in Orlando, Florida.

Standing at 5’6″, Brown owns a 6’11” standing reach, a 8’0″ block touch and an 8’9″ approach jump. Some highlights of her play can be seen here through Hudl and here through BeRecruited.

Missouri finished the 2017 season at 22-13 overall and made their second consecutive Sweet 16.

I’m super excited to announce that I have verbally committed to play volleyball at the University of Missouri! Huge thank you to all of my coaches, family, and friends that have helped me along the way. Go tigers!!!🐯🖤💛 #Showme #MIZ pic.twitter.com/LLclVlMbl5