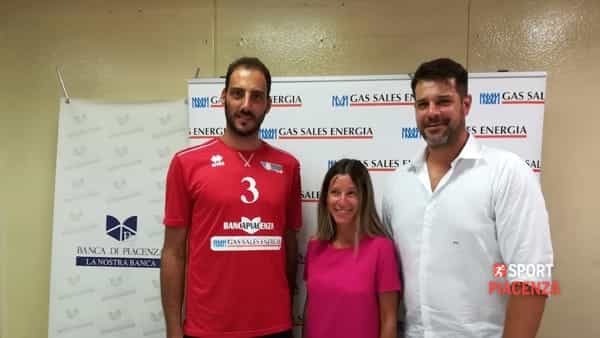 Alessandro Fei will play in the Serie A2 for Piacenza, working with General Director and former teammate, Hristo Zlatanov. He is just 36 points away breaking the all-time scoring record in Italy's top division.  Current Photo via Piacenza

While Wixo LPR Piacenza has had some financial problems the last few seasons, this was the first year their deficits became too much to overcome in order to remain in the top flight of Italian professional volleyball. Back in July it was announced they will be playing in Serie A2 next season. They were able to keep a familiar andaccomplished player to wear red as they look for success in a new league, Alessandro Fei. The opposite/middle blocker has played for 22 seasons in the Italian SuperLega (or Serie A1) and has won 4 championships with Sisely Treviso. Fei had received offers from teams in the SuperLega, but has declined them in order to stay in Piacenza.

He won the CEV Challenge Cup for Piacenza back in 2013 and was the MVP of the Coppa Italia in 2014. Fei’s 9652 points in the A1 or SuperLega is just 36 shy of the all-time record. That record is held by his friend, former teammate, and the General Director of Picenza, Hristo Zlatanov. When asked if he felt Zlatanov tried to keep him at Piacenza so he could not break his record, Fei replied, “I do not think so. He asked me to help him in helping the society and the younger kids grow up. I accepted very willingly. Getting records is always a great pleasure, but right now it’s not my goal.”

He went on to say that he has enjoyed great support from the community, and his top priority is to get Piacenza back into the SuperLega. They will open the Serie A2 season on October 14th against Pool Libertas Cantù.