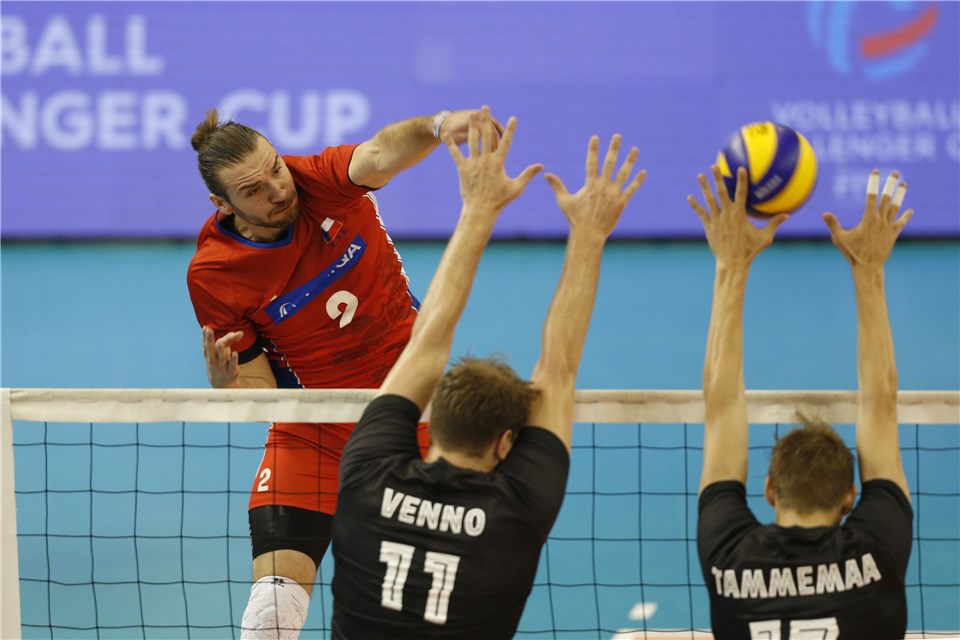 Hadrava's 27 points pushed Czech Republic to the Finals where they will play Portugal for a spot in the 2019 Volleyball Nations League. Archive Photo via FIVB

In the opening semifinals match, Czech Republic worked past Estonia for a spot in the Gold Medal match, sending the losing side to play for Bronze. Beyond the importance of awards, the main goal is still available for the Czech side, who are now one win away from earning a berth in the 2019 Volleyball Nations League.

While Estonia put up good numbers in the serve (7-4 in aces), they couldn’t keep up with the Czech spike (54-51) and block (13-8). That, combined with a more clean game from Czech Republic (8 less team errors) led to the four-set outcome as the winning side overcame a late surge to push through at the end.

Individually, Jan Hadrava (27 points) for Czech Republic and Robert Taht (22 points) each had large scoring outbursts. With everyone else on both sides collecting 44 points exactly, that battle of the best going to the Czechs was a huge difference as Hadrava pushes them to the finals.

Portugal made it an all-European championship match tomorrow as they took down the NORCECA champs in straight sets. Despite the 3-0 score, the match was very close throughout and even featured a Portuguese comeback in the third to take it in extra points. Portugal will now compete for Gold and a spot in the 2019 FIVB Volleyball Nations League while Cuba will look to rebound and at least claim Bronze.

The biggest difference in the match was the ability to terminate, which favored Portugal in terms of spikes by 12. Each team from there had the same amount of errors and Portugal owned a one point advantage in blocks (6-5) and aces (5-4).

In terms of players, it was the classic tale of a spread-out efficient attack versus one with a star that didn’t have as much support. Portugal had four in double-digit scoring, led by Alexandre Ferreira (13 points) and Lourenco Martins (12 points), while Cuba had just one over seven with the strong performance from Miguel David Gutierrez Suarez (21 points).