Florida Lone Undefeated DI Team – How Do They Continue This? 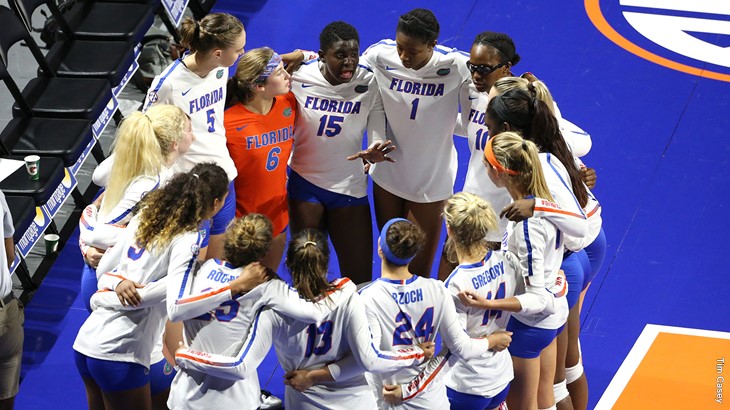 We are now seven weeks into the 2017 NCAA volleyball season and there is just one team that is the lone undefeated squad left in the Division I field - Florida.  Current Photo via Florida Athletics

We are now seven weeks into the 2017 NCAA volleyball season and there is just one team that is the lone undefeated squad left in the Division I field – Florida.

The Gators are sitting at an 11-0 record thus far in the season and are three matches behind as they had to cancel a number of contests due to the threat of Hurricane Irma. This was the team’s annual Active Ankle Challenge to where they would have faced off against Michigan State, UNC Greensboro and American.

Now, the team has a 3-0 start to SEC play where they have downed Arkansas, Tennessee and LSU. From here on out, the Gators will compete in only SEC matches until NCAA tournament time. From the looks of their SEC schedule, they don’t have much of a challenge to continue on their undefeated path. However, this is a preemptive statement, as there have been many upsets over the course of the preseason and beginning of conference play around the country.

Who Has A Shot Of Downing The Gators?

How Does Florida Stay On Top?

Currently, Florida sits at #1 in both the VolleyMob and AVCA Coaches Rankings. How do they continue to hold onto this position?

So far this year, Florida has stayed consistent in their play, holding off their opponents in kill 540 to 430 and eliminating their own offensive errors. In total, the Gators are hitting .277 on the year and this is enough consistency to help them going forward – but they are also holding their opponents to a low .140 hitting clip this season, which surely plays a big role, too.

Who is contributing big for the team?

Three players are consistent offensive threats for the Gators – Rhamat Alhassan, Carli Snyder and Rachael Kramer. So far this season they all have posted over 100 kills for the team in just 39 sets of play along with Snyder’s 24 aces.

On defense, Alhassan has posted 70 blocks on the year while Kramer has added another 39. In the backcourt, Caroline Knop has picked up 186 digs while Snyder has added in another 140.

The Gators have a long season ahead of them but will take on Texas A&M on October 4 and Georgia on October 8 at home for their upcoming matches.