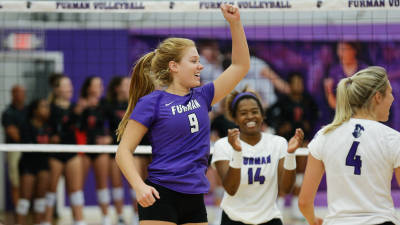 Furman starts out 2018 as the SoCon league favorites, although a pair of others received first-place votes as well. Archive Photo via Furman Athletics

Three different teams received multiple first-place in the preseason SoCon women’s volleyball poll, but in the end Furman came out on top as the overall favorite.

To go with the most points at 60, Furman also had the most first-place votes at four. The Paladins went 21-10 last season en route to a regular season SoCon championship at 14-2, returning eight letterwinners and two Preseason All-Conference picks – led by Jamila Johnson who was a 2017 All-Conference First-Team choice – to the fold in 2018.

“As the reigning regular season champs, Furman will be the strongest team in the league,” Wofford head coach Lynze Roos told VolleyMob. “They’re always well coached and they’re consistent contenders.  They return some of the most physical players in the league.”

ETSU wasn’t far behind at 57 total points and a trio of first-place selections. The confidence in the Pirates comes from them appearing in the NCAA Tournament as the SoCon Tournament champions last season. They also bring back five starters plus the libero, led by preseason honorees Leah Clayton (2017 All-SoCon First-Team) and Marija Popovic (2017 SoCon Freshman of the Year).

“They play at a high level, extremely physical game and will be out to repeat as SoCon Tourney champs,” Roos also said to VolleyMob. “There are also some extremely competitive teams not to be discounted – UNCG will return some of their key players and Samford, UTC and Western won some of the toughest matches of the season a year ago.”

Wofford cleaned up the last couple of first-place picks after being the team to contend with ETSU for the tournament title in 2017 and posting a 22-11 overall mark. They bring back their entire starting lineup, including a pair of preseason all-conference choices in Colleen Reilly (two-time all-conference pick) and Catie Cronister (the 2017 Co-SoCon Player of the Year).

“Catie’s game grew considerably as a sophomore, and she has steadily improved her all around skills in the spring,” Roos added about her own bunch. “Additionally, we return the core of our starting line up which should allow for some stability and confidence heading into the toughest non-league schedule we’ve played.”

The rest of the list includes those other teams mentioned by Roos, with Samford at fourth – who placed Krista Boesing on the individual preseason list – UNCG at fifth, Chattanooga at sixth and Mercer at seventh – who put on the final individual honoree in Paige Alsten.

The full list of team projections and individual preseason accolades can be seen below via the SoCon: