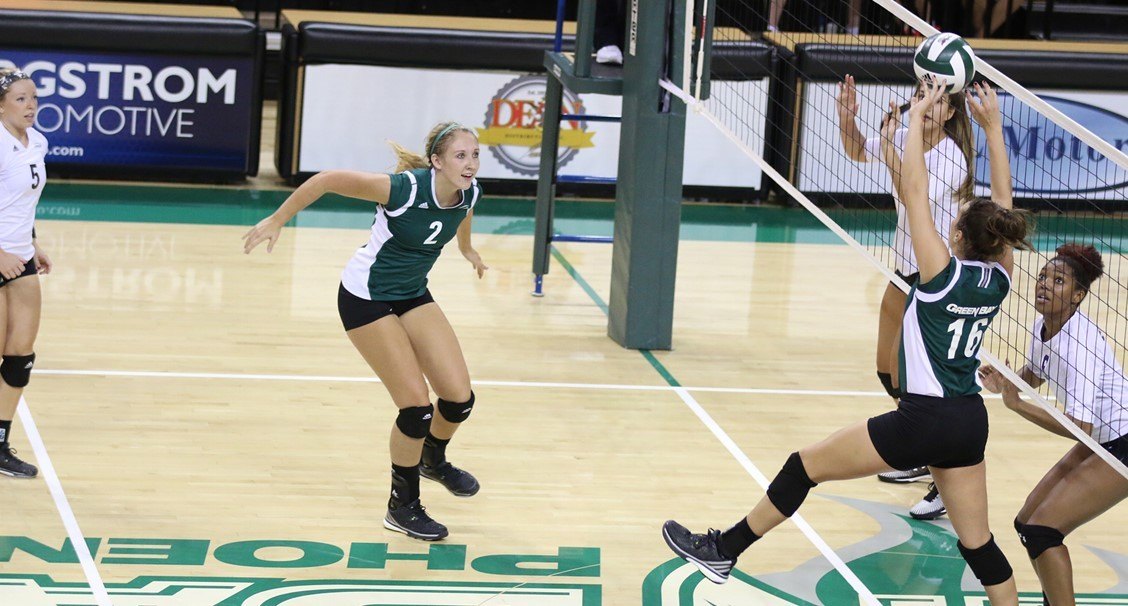 Green Bay survived in five sets while Illinois State took care of business as the two will cross paths in the NIVC Second Round. Archive Photo via Green Bay Athletics

Illinois State kicked off their 2017 NIVC journey with a sweep of IUPUI on a neutral court. The victory pushes the Redbirds to the second round/round of 16, as they play for a spot in the quarterfinals tomorrow.

The difference in hitting percentage (.365 to .054) showed the separation between the two teams in the match, as just four ties and one lead change occurred for the entirety of the three sets.

On the other side of things, Gabby Fisher led IUPUI with six kills but was held to a .100 day. The inability to be terminal and Illinois State keeping balls alive (50-37 edge in digs) was the biggest piece in holding IUPUI to such a low hitting percentage. Leading that charge was Courtney Pence, who recorded 14 digs in the match and became the Redbirds all-time digs leader as just a junior.

Beyond those numbers, the two sides were even in aces (3-3) and blocks (4-4). Illinois State was more error free in attacks too with just nine compared to IUPUI’s 18 despite the equal measure in blocks for each school.

While the season comes to a close for IUPUI, Illinois State keeps things going with their second round game tomorrow. That one comes

Playing in front of their home crowd, Green Bay had a strong start and finish as they almost let a 2-0 set lead slip to a loss. Instead they earn a five-set victory to advance to the second round of the NIVC Tournament.

The first set was pretty vanilla with Green Bay never being behind, but the second provided more than enough action for the first two. In total, 14 ties and five lead changes occurred in a set that neither team would surrender. In the end though, Vanessa Buman (36 digs) kept enough balls off the court to funnel to Maddie Yoss (51 assists, 15 digs). With four players in double-digit kills, Yoss had multiple options to dish things out to as Green Bay snagged the 2-0 set lead.

While most teams would be buried by a loss in such a long set into an intermission, Bowling Green responded and won the third after storming in front 15-5 and taking the set 25-18. Behind Nicole Slimko (16 kills, seven blocks), Katie Kidwell (12 blocks, six kills) and Kallie Seimet (38 digs, three aces), Bowling Green was even better in the fourth, winning it 25-16.

In the fifth, Green Bay jumped ahead 4-1 early, but Bowling Green battled back to take the 8-6 lead at the switch. That was extended to 12-9 and held to 13-11, but a 3-0 Green Bay run gave them the first match point chance. While they didn’t take advantage of it on the first try, with a second shot at 15-14, Lydia DeWeese (17 kills, .324, five blocks) and Taylor Wolf (12 kills, 16 digs, six assists, four blocks) combined for a match-ending block.

Neither team could consistently get the offense going and both were even in aces. The biggest differences came on defense as Bowling Green dominated at the net (21-11 in team blocks) while Green Bay’s back-row defense (126-96 in digs) proved to be a difference-maker.

Green Bay will look for similar resiliency in their next match as they take on Illinois State tomorrow for a spot in the NIVC Quarterfinals.