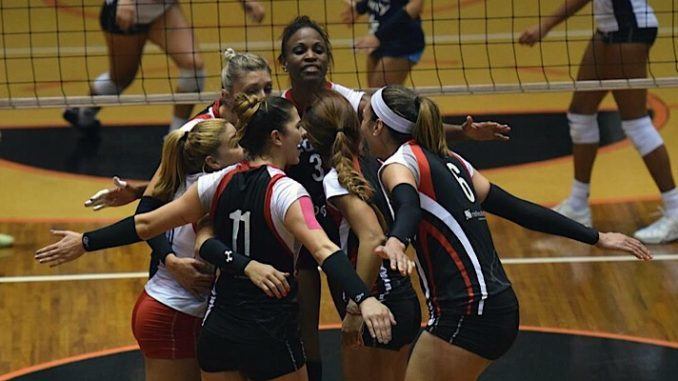 After a series of transfers, Haley Eckerman, a former Texas University star athlete, makes the move back to Leonas de Ponce for the third time in her career.

The transfer, though, came with some complications this time around. The beginning of the 2016-17 season landed Eckerman with the Unione Sportiva ProVictoria Volleyball Monza team in Italy’s A1 Series. The end of the season brought Eckerman back to Puerto Rico to finish competition with Leonas de Ponce. Upon her return, Eckerman was determined to be ineligible by the Puerto Rican Volleyball Federation.

In an Instagram post by teammate and fellow American, Gina Mancuso,  explains a press release sent out by the Puerto Rican Volleyball Federation.

Roughly Translated Version: The top female volleyball team Ponce Leonas is facing the process of a protest instituted by the Humacao Orientals team to the Puerto Rican Women’s Volleyball Federation ( FPV). The view was made last Friday, April 21, 2017 at 2:30 pm On yesterday, Saturday, April 22, 2017, was published, through the media, the alleged final determination of the FPV : “The Lionesses of Ponce are eliminated of the semifinal round by confiscation”. In addition, a calendar of the semifinal series based on this decision has been circulated. All of the above has happened without our team being duly notified by the FPV of its determination and without having been allowed to exhaust all the remedies under the FPV Regulation. In order to safeguard the purity of the procedures, the Ponce Leonas team will not make public statements until it has been duly notified of the determination of the FPV and we can announce what will be the course to be followed by our Administration. We thank all the public for the signs of solidarity and commitment to our players, technical staff and Administration. PONCE LEONAS PLEASE SHARE & SUPPORT! #PonceLeonas

The post shows that Humacao Orientals sent out the initial lawsuit, they entered the semifinals of the Puerto Rican league following the dismissal of Leonas de Ponce.

The Puerto Rican Federation sent approval to Eckerman that her contract was complete and she was eligible to play, but two weeks later, the contract was in question.

Thanks to my family and friends who have checked on me the last few days. I am sorry if I haven’t responded or if it’s been delayed. Most of you ask what happened or am I ok. And here’s the thing for once no I’m not. Every other season in Puerto Rico had ended with my team losing in a game 7 fighting all the way! But this year it’s like people knew we could have gone all the way and it was like they were scared so the ran and “told” but everything on my part was done correct except for a missing signature. The federation approved my contract and allowed me to play but two weeks later was told it was incorrect. Some how the information they from my contract was to be private and only available to myself, my team and the federation. The way we were taken out leaves me sick to my stomach and an emotional wreck. Especially for my teammates who have been here since November working their asses off to get us all the way here!! So I am sorry if I do not respond or in the next few days if it looks like Ive just moved on just know it’s a cover up to keep myself occupied because words really can’t explain how hurt I am.