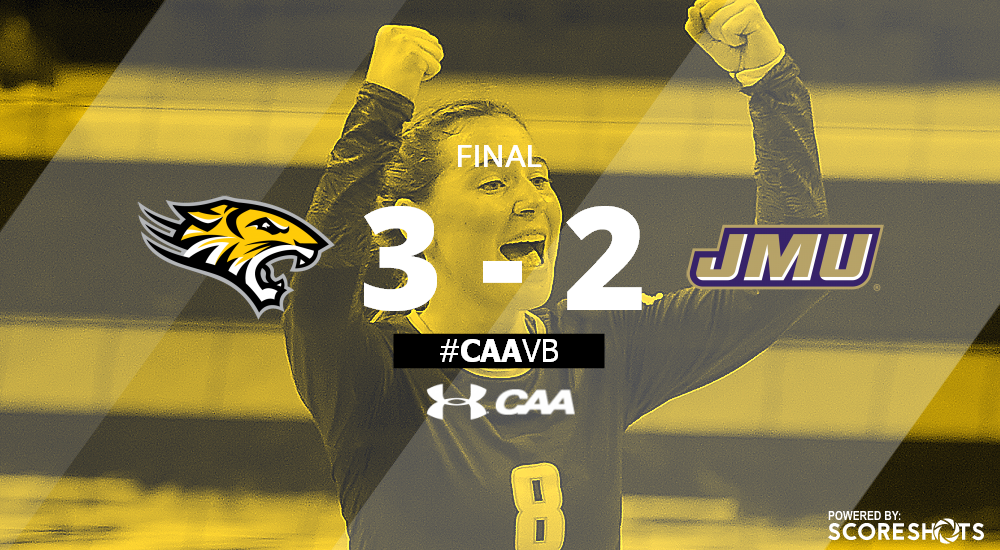 Anna Holehouse posted a school-record 45 digs while Julymar Otero had her sixth triple-double of the season to lead Towson to a 5-set win over JMU. Current Photo via Towson Volleyball/Athletics

Towson, Maryland – In a match featuring a pair of teams in the 60’s in this week’s RPI poll, Towson came out with a five-set win over James Madison.

In a match without a ton of momentum or long runs, it was versatility and consistency that was needed and shown in Julymar Otero, who logged a triple-double with 27 assists, 15 kills (.233) and 14 digs. Interestingly enough, Otero now has triple-doubles in both matches with James Madison and now has six on the year, including in two straight matches.

Beyond that, Towson used a stingy back-row defense led by a phenomenal match from Anna Holehouse (45 digs), as she set the new school-record for most digs in a match, while Carola Biver (16 kills, 22 digs) added to both the offense and defense. Holehouse proved to be a critical performer as the Tigers out-dug the Dukes 118-102 in a match where neither team was terminal and were thwarted by strong defenses. The .110 (Towson) to .103 (James Madison) hitting percentages were a combination of that back-row defense as well as over two blocks per set from both sides.

The first set was incredibly tight as 16 ties and six lead changes highlighted the game as Towson just slipped in front 25-23. There was less back-and-forth in the second with seven ties and three lead changes, but it was just as close of a finish as James Madison came down from 24-23 to to even the match 1-1 in sets with a 27-25 extra point victory.

Compared to the first two sets, the third seemed like it was heavily distanced. With three ties and zero lead changes, Towson led throughout and came out on top by three points – the most in a set to that point. They also led for a big chunk in the fourth as they tried to close things out, but a 6-2 James Madison run turned things around to force a fifth.

In that fifth and final set, Towson jumped in front 6-1. However, James Madison stormed back and eventually evened the match where it sat tied at 10-10. A Biver kill was followed by back-to-back Otero points at the start of a 5-0 run that would end the match in the Tigers favor at 15-10.

Just one more match remains for Towson before the CAA Tournament as they host Delaware for senior night. James Madison has another top four team in the conference up next as they host Northeastern on Friday before finishing up regular season conference play on Sunday against Hofstra.

The Tigers wrap up the regular season by hosting Delaware on Sunday, November 12 at 1 p.m. Towson will honor seniors Payton Windell and Otero before the match.

TOWSON, Md. – The James Madison volleyball team dropped a five-set match to Towson on Monday night inside the SECU Arena. The Dukes fall to 18-5 overall and 9-5 in Colonial Athletic Association action, while Towson moves to 25-4 and 11-4 in league play.

DOMINATE BLOCKING
For the second consecutive match, and the fourteenth time this season, the Dukes have recorded double-digit blocks. JMU has out-blocked its opponents 247.0 to 122.0, averaging 2.8 blocks per set. Seven Dukes have tallied double-digit blocks, led by White with 129.0. The sophomore leads the league with 92 total blocks in conference play, averaging 1.61 per set.

UP NEXT
The Dukes are back at home for their final stand of the regular season as they face Northeastern and Hofstra in crucial CAA matches. They will face the Huskies on Friday, Nov. 10 at 7 p.m. and the Pride on Sunday, Nov. 12 at 1 p.m. Earlier this season, the Dukes dropped a five-set match to Northeastern and won a five set match over Hofstra.