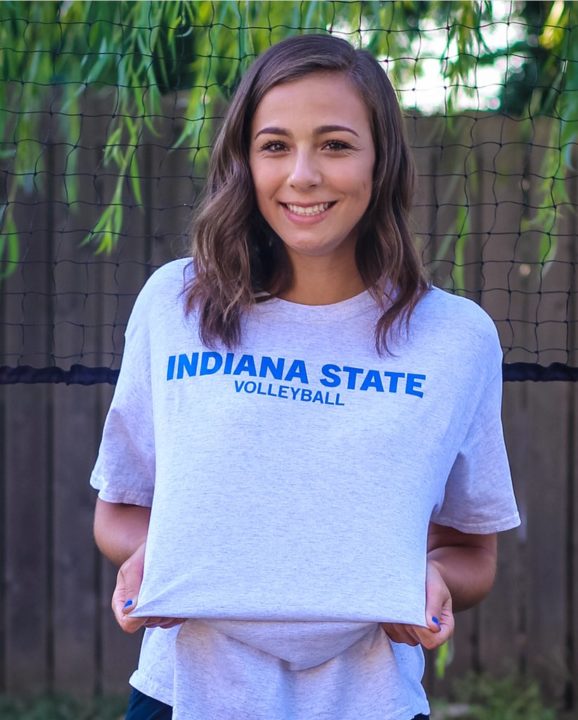 Indiana State has grabbed its second recruit for 2020 in a short span with the commitment of Kaitlyn Hamilton. Archive Photo via Free State Volleyball (@FirebirdsVB)

Hamilton will be a junior once the new school year begins at Lawrence Free State High School in Kansas. As a sophomore, her second season of varsity, she helped the team to a 26-15 record.

Individually, according to her MaxPreps profile, she notched 271 kills (2.8 per set) on a .298 hitting percentage, 35 digs (0.4 per set), 33 blocks (0.3 per set), two aces and an assist. That earned her honorable mention recognition from the 2017 Journal-World All-Area volleyball team.

Standing at 6’0″, Hamilton also plays with ASICS MAVS and most recently the 16-1 team as an outside hitter and middle blocker. Video of her play can be seen below via YouTube:

The other class of 2020 recruit that just committed to Indiana State is outside hitter/right side Mallory Keller. It’s also another commitment from Lawrence Free State High School, where Hamilton will team up with senior-to-be right side Rachel Hickman, a class of 2019 Kansas commit.

We are so proud of our Kaitlyn Hamilton who had verbally committed to continue her volleyball🏐 and academic career at Indiana State University! You will do amazing things!!! 💙 pic.twitter.com/Ak3yem80Lv