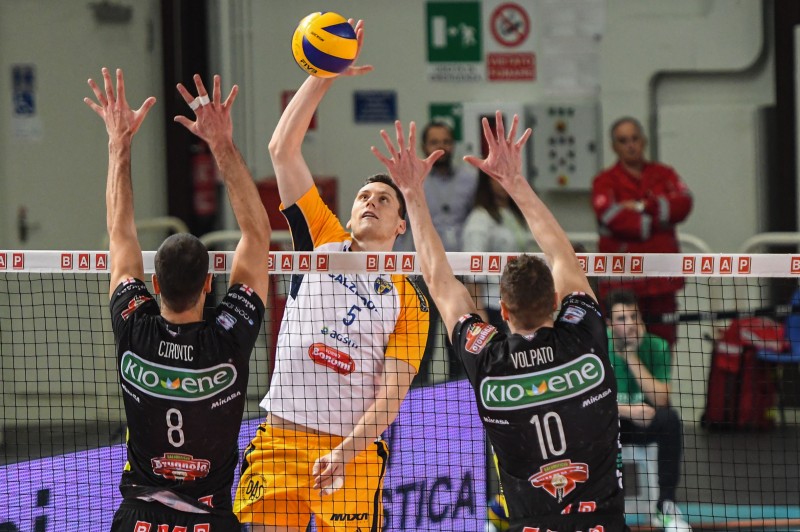 The fourth round of the Italian Men's League has concluded with Sir Safety Conad Perugia remaining in the top position without a loss yet.  Current Photo via legavolley.it

The fourth round of the Italian Men’s League has concluded with Sir Safety Conad Perugia remaining in the top position without a loss yet. On the other hand, Cucine Lube Civitanova suffered their first loss of the year against Top Volley Latina in straight sets.

Calzedonia Verona rallied for a five-set win over Kioene Padova, thwarting their momentum in the league as they won their round three match over Vibo Valentia.

Diatec Trentino bounced back this week with a four-set win over BCC Castellana Grotte after falling to Bunge Ravenna last week. Filippo Lanza was the top performer in the match with 17 points on a 53% attacking efficiency. The top scorer of the match, however, was Nicholas Hoag with 20 points.

Both Sir Safety Conad Perugia and Azimut Modena remain completely perfect at the start of the season, with four wins now and not having lost a single set. Top Volley Latina continued their winning ways along with Bunge Ravenna, as they won for the second straight week. Vibo Valentia made a round four comeback, after dropping their round three meeting to Kioene Padova.

Calzedonia Verona took down Kioene Padova in a five-set battle where American Thomas Jaeschke led the squad with 20 points in the win.

There are currently four teams that have one less match under their belts – Bunge Ravenna, Cucine Lube Civitanova, Calzedonia Verona and BCC Castellana Grotte. Both teams have had one match postponed this season and once they play their overall rankings could improve or decline.