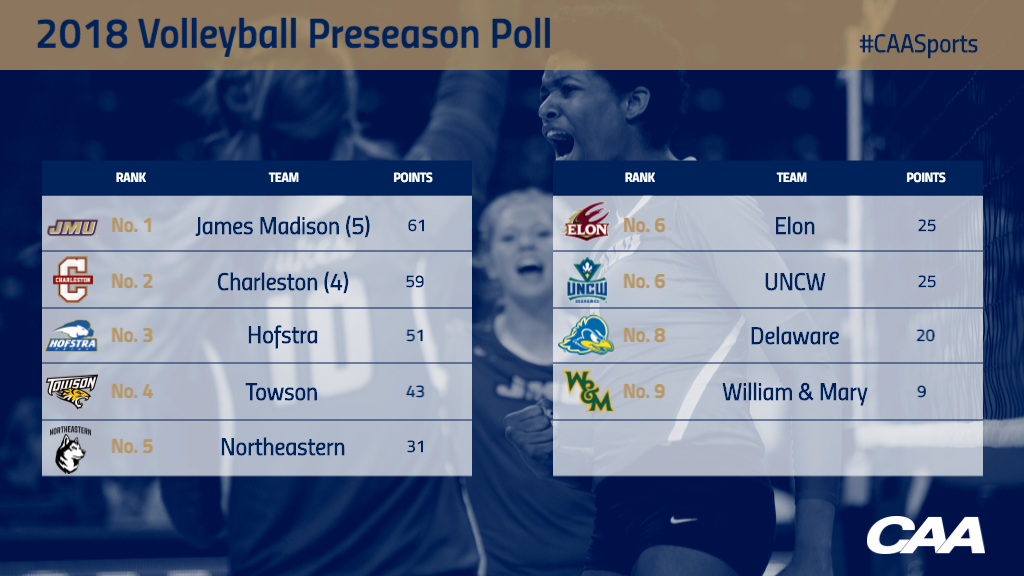 James Madison and Charleston were voted tightly together at the top of the CAA Volleyball Preseason Poll. Archive Photo via CAA

Following back-to-back league championships, James Madison is the preseason Colonial Athletic Association favorite to claim the conference title once again in 2018. It was also the slimmest of margins between the top two that the poll has seen since 2012.

James Madison didn’t have a ton more votes than second – Charleston – as they picked up five of the nine first-place votes and 61 points overall. The defending tournament champs went 23-6 last season and have 15 letterwinners back in the fold. They also landed one on the Preseason All-CAA Volleyball team in M’Kaela White (who broke the school record for block assists in 2017) with another, Bryn Recker, earning an honorable mention nod.

Charleston grabbed the final four first-place projections and 59 points, as they come off of a CAA title season as well, just in the regular season that pushed them to 27-6 and an at-large bid to the NCAA Tournament. In terms of just members of the Preseason All-CAA Volleyball team – not counting honorable mentions – Charleston was the only team to land two on the list with Allison Beckman and Kennedy Madison. In total, 11 letterwinners return.

Finishing the top three is Hofstra, who went 18-14 in 2017. They are led by the 2018 CAA Preseason Player of the Year, Laura Masciullo (4.31 points per set was third in the CAA in 2017), with Michela Rucli getting an honorable mention pick.

Rounding out the top five is Towson and Northeastern. The Tigers come back from a 27-6 campaign in 2017 with 11 letterwinners to 2018, including preseason selection Jocelyn Kuilan on the right side. Northeastern had the final individual honoree in Gabrielle Eyl, who led the league with 640 digs last season.

Sixth through eighth was very tight in the voting, with Elon and UNC Wilmington tied at 25 points and Delaware not far behind with 20. William & Mary rounds out the nine.

The full list of team predictions and individual preseason accolades can be seen below via the CAA: