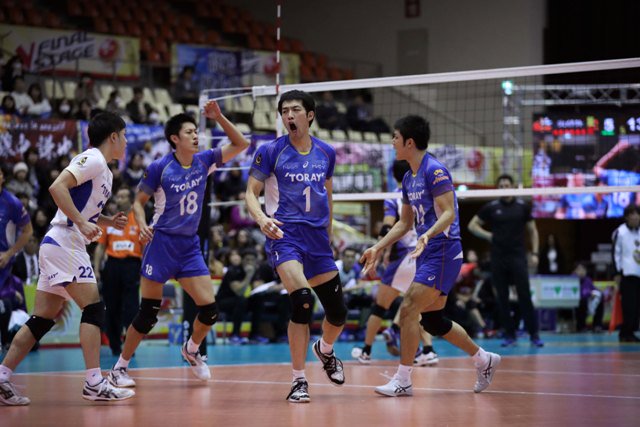 The Panasonic Panthers met the Suntory Sunbirds, their Osaka rivals in the first of a tripleheader in the Japanese Men’s... Current Photo via Japan V.League

The Panasonic Panthers met the Suntory Sunbirds, their Osaka rivals in the first of a tripleheader in the Japanese Men’s V.League on Saturday. Suntory was looking for their first win of the Final 6, while a win by the Panthers and a little help from others would allow them to clinch at least a Final 3 (semifinal) berth. The first set was close, but a late run by the Panthers gave them enough of a gap to win the set 25-22. In the second set, Panasonic jumped out early and never let Suntory back in for a 2-0 lead. Suntory took slim lead at 12-11, but the Panthers went on a 8-2 run to give them a five point lead, which they held to finish the set and match 3-0. The Panthers Three Musketeers of Kunihiro Shimizu, Michal Kubiak and Tatsuya Fukuzawa each hit double figures. Shimizu with 12 (all kills), Kubiak with 13 (9k, 3b, 1a) and Fukuzawa with 11 (7k, 4b) in the win. Suntory were really dependent on Kenya Fujinaka with 13 points (all kills) and Masashi Kuriyama with 11 (10k, 1b) in the loss.

JT Thunders faced Toyota Gosei Trefuerza in the second match of the day. This match was expected to be a battle of the foreign opposites of Igor Omrcen for Toyota and Thomas Edgar for JT. After two sets, both teams were tied on points 46-46 and sets 1-1. In the third Toyota jumped to a quick 3-0 lead and the Thunders fought hard to get back even in the set. Late in the third set, the Thunders took a 24-23 lead on a block off an Omrcen spike. The Trefuerza used their final timeout for the set and Thomas Edgar served an ace to give the Thunders a 2-1 set lead. In the fourth set, JT took a quick 3 point lead and kept expanding it for a comfortable win 3-1. Edgar led all scorers with 34 points (28k, 3b, 3a) in the match. His Thunders teammates Kenta Nakajima (8k, 3b) and Shohei Yamamoto (all kills) each contributed 11, and the setter Akihiro Fukatsu had three blocks and aces each for 6 points. Omrcen could not keep up with Edgar and finished with 21 points (17k), four of which were aces. Takuya Takamatsu also had 18 (16k, 1b, 1a) in the loss for Toyota. JT are now 2-0 in the Final 6, while Toyota are 1-2. However, JT is still behind the Trefuerza on points, which is what matters in the Final 6.

In the last match of the day, the Toray Arrows faced the JTEKT Stings, a loss by JTEKT would eliminate them from the Final 3, while Toray was looking to stay ahead of the Thunders. The Arrows jumped ahead to a 2-0 lead, but the Stings dominated Toray in the third and fourth sets winning by 25-15 in each set. Toray could not be stopped in the fifth set after they went on a 7-1 run to start the set and coasted to the set win 15-6 and match win 3-2. Toray stays in third place at 7 points, but the Thunders are tied with them and have one more game to play. With the match going five sets, Panasonic is guaranteed a berth in the Final 3 as Toray can only reach a maximum of 13 points, Toyota a maximum of 14 and Panasonic is already at 14 points. Panasonic’s better regular season record is the tiebreaker with Toyota. Toray’s Gavin Schmitt led all scorers with 28 points (26k, 2a) and two of his teammates each had four aces, Takaaki Tomimatsu and Yuji Suzuki in the win. JTEKT relied on the tandem of Yuji Nishida with 22 (20k, 2a) and Matey Kaziyski with 23 (19k, 2b, 2a) in the loss. The Stings are eliminated from making the Final 3 with two matches left. 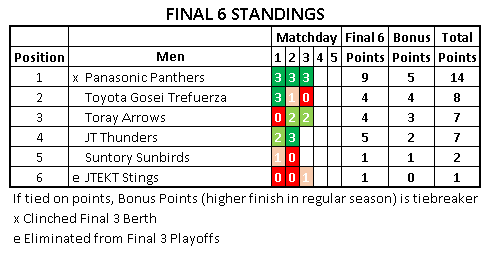