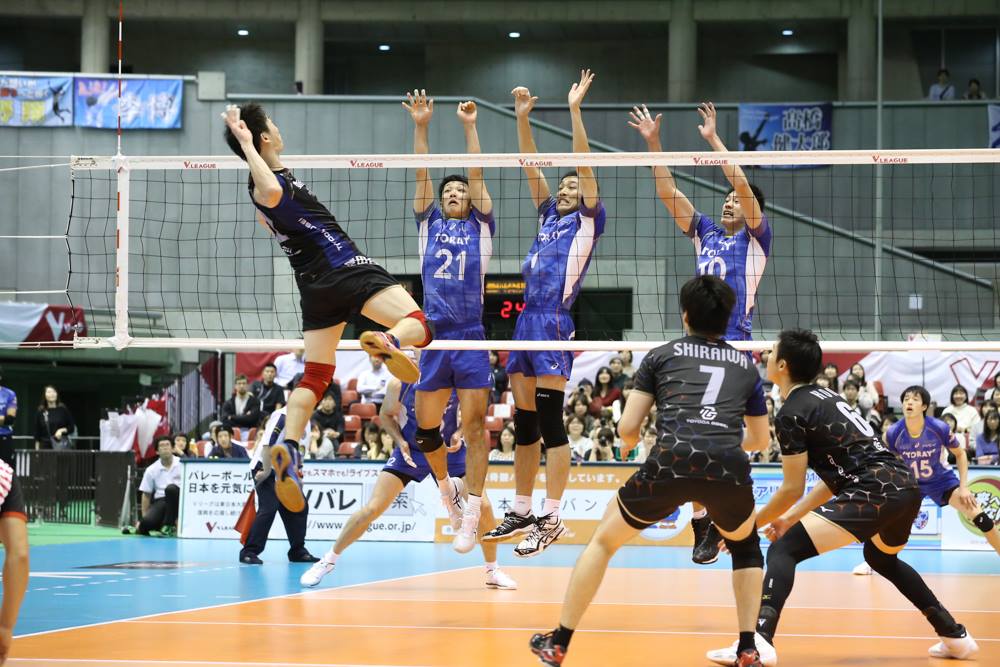 The Japanese Men’s V.League Premier League had their opening matches over two days (October 21 and 22) in Tokyo at... Current Photo via Japan's V.League

The Japanese Men’s V.League Premier League had their opening matches over two days (October 21 and 22) in Tokyo at the Tokyo Metropolitan Gymnasium. All of the matches had attendance of over 2,000.

In the first match on Saturday, JT Thunders faced Suntory Sunbirds. Suntory who had lost Masahiro Yanagida to Bisons Buehl were looking to start on the right foot. While JT wanted to see what their Australian import Thomas Edgar could do on the court. After a blowout first set win for the Thunders, it was a closely fought match with the next three sets all being decided by 2 points. The Thunders won the fifth set 15-12 to take the match. Edgar did not disappoint for the Thunders with 43 points (39k, 2b, 2a), which is only his second highest scoring match in Japan, after 50 in the 2015 World Cup for Australia. Cuban Yadrian Escobar had 24 points (19k, 3b, 2a) and Masahi Kuriyama had 20 (17k, 2b, 1a) for Suntory.

In the second match on Saturday, Panasonic Panthers had a comfortable win over FC Tokyo. Kunihiro Shimizu led Panasonic with 14 points (13k, 1a). Poland’s Michal Kubiak also contributed 12 points (7k, 3b, 2a) for Panasonic. Tatsuya Fukuzawa who returned from Brazil for Panasonic also had 11 points (8k, 2b, 1a). FC Tokyo was led by Yuma Nagatomo with 14 (13k, 1a), and Bosnian Milan Pepic contributed 10 (9k, 1a).

In the first match on Sunday, it was a rematch of last season’s final, Toray Arrows vs Toyota Gosei Trefuerza. Toray had brought in Canadian Gavin Schmitt to be their offensive force, while Trefuerza had the Croatian scoring machine Igor Omrcen. Last season Toray won three of the five matches with Toyota. Toyota took the closely fought match in a sweep 3-0. Omrcen led all scorers with 28 points (22k, 5b, 1a), while Schmitt led Toray with 15 points (14k, 1b).

For the last match of the weekend, JTEKT Stings and Sakai Blazers split the first two sets. JTEKT had to go extra points in the fourth set to win the match 3-1. Matey Kaziyski for JTEKT with 27 (25k, 1b, 1a) and Wallace Martins for Sakai with 26 points (23k, 3b) cancelled each other out. Shinichi Seino and Hiroaki Asano for JTEKT were in double figures for kills, and Sakai’s Naoya Takano was their only other double figure kill player.