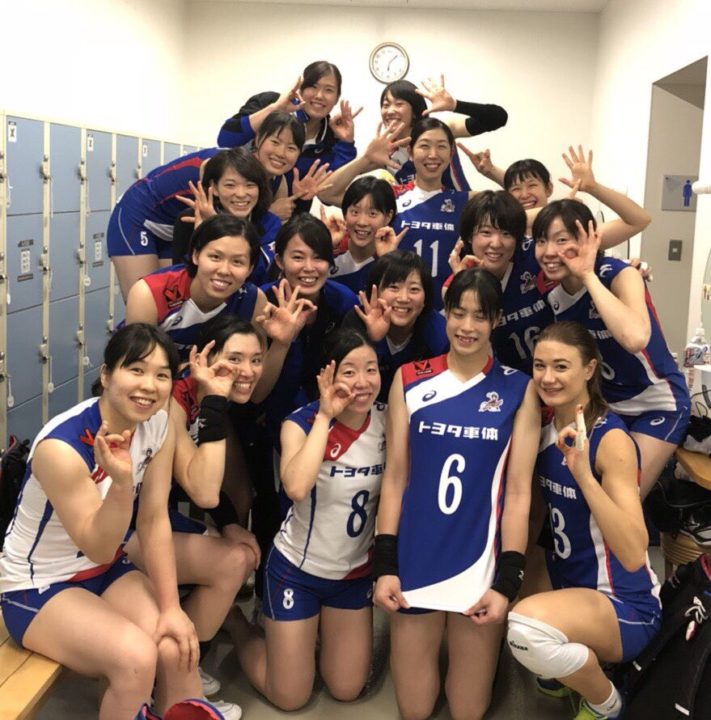 Having just past the halfway point, the Hisamitsu Springs faced JT Marvelous in a battle of the top two teams... Current Photo via Toyota Auto Body Queenseis

Having just past the halfway point, the Hisamitsu Springs faced JT Marvelous in a battle of the top two teams in league. In the previous match earlier in the season, it went five sets, which is the only blemish on the Springs record this season. In which they did not get maximum points from a match. The result of the match would not change either team’s position in the standings, but it would be a good gauge to for the Final 6. The Marvelous took the first set, but could not make it two as Hisamitsu took the second 25-22. In the third set, Hisamitsu got an early lead and held it. In the 4th, Hisamitsu again took a lead, and held on 25-23 to win the match 3-1 and remain a perfect 12-for-12. The offensive balance with the Springs is ridiculous. Four players with 13 or more kills in a four set match. Yukii Ishii 21 points (20k, 1a), Yuka Imamura 19 (16k, 2b, 1a), Foluke Akinradewo 18 (16k, 2a) and Risa Shinnabe 17 (13k, 2b, 2a). JT’s Serbian Brankica Mihajlovic led all scorers with 30 points (28k, 1b, 1a). Mizuki Tanaka also contributed 14 (13k, 1b) in the loss for the Marvelous.

NEC Red Rockets were looking to end a three-game losing streak when facing Toray Arrows who were in 3rd place. In their last meeting the Arrows swept NEC 3-0. The Red Rockets took the first two sets comfortably and then in the third they said to themselves, we want to close this match out. They did 25-14 to sweep Toray back 3-0. NEC dominated at the net with +4 blocks (6-2) and -6 hitting errors (7-13). They also won the service line with +3 aces (7-4) and -6 six errors (8-14). 19 points difference with your opponent will win you a lot of matches. Kana Ohno (8k, 3b, 4a) and Nanami Hirose (12k, 1b, 2a) for NEC led all scorers with 15 points each. Toray did not have a player in double figures. NEC moved into 6th place with the win, while Toray dropped to 4th place with the loss.

Hitachi Rivale were on a two-match losing streak and met Denso Airybees who looked to get back into the win column after their loss to JT Marvelous in the last round. This was an odd match as only two sets were considered tight, the first and the fifth set. All others had an 8-point gap from the set winner. Hitachi held onto a lead in the fifth set to win the match 3-2. Denso outscored Rivale 104-99 in the loss. Rivale’s Miwako Osanai led all scorers with 22 points (19k, 1b, 2a), while Yurie Nabeya had 20 for Denso. German Christiane Furst had 7 blocks for Denso as part of her 10 points (3k). American Curtsy Jackson nearly matched her in blocks with 6, but did match Furst on points with 10 (4k) for Hitachi. Risa Ishii also had 4 aces for Denso as part of her 14 points (10k). Hitachi are still last even with the win, while Denso maintain 5th place.

Toyota Auto Body Queenseis faced Ageo Medics in a match for their foreigner opposite players. The match went went five sets and both teams took 346 swings, but combined Neriman Ozsoy for Toyota (86) and Kenia Carcaces for Ageo (76) took 162 swings or 46.8% of the attempts at the net. Ozsoy ended up with 37 kills, while Carcaces had 31. A win for the Queenseis in that battle. Neriman also won the service line battle by 5 points (+2 aces (2-0) and -3 errors (0-3)). Getting back to the match, the first two sets were close but split between the two teams. Ageo dominanted the 3rd set winning 25-16. Toyota fought back with a comfortable 25-20 win in the fourth set. The Queenseis took an early lead in the fifth set, but lost it, and gained it back to win 15-13. Ageo will be kicking themselves for losing this match as they outscored Toyota 107-104. Ageo had a +21 advantage at the net (+17 kills (76-59) and -4 errors (13-17)). However Ageo lost that advantage at the service line as the Queenseis were +16 (+4 aces (6-2) and -12 errors (3-15). Erika Araki‘s blocking for Toyota was also a key with 6 blocks, which helped them win the blocking side of the net (10-7) and the match 3-2. Miyuki Horie for Ageo had 18 (17k, 1b) points in the loss. Toyota with the win moved into 3rd place, while Ageo dropped to 7th place with the loss.