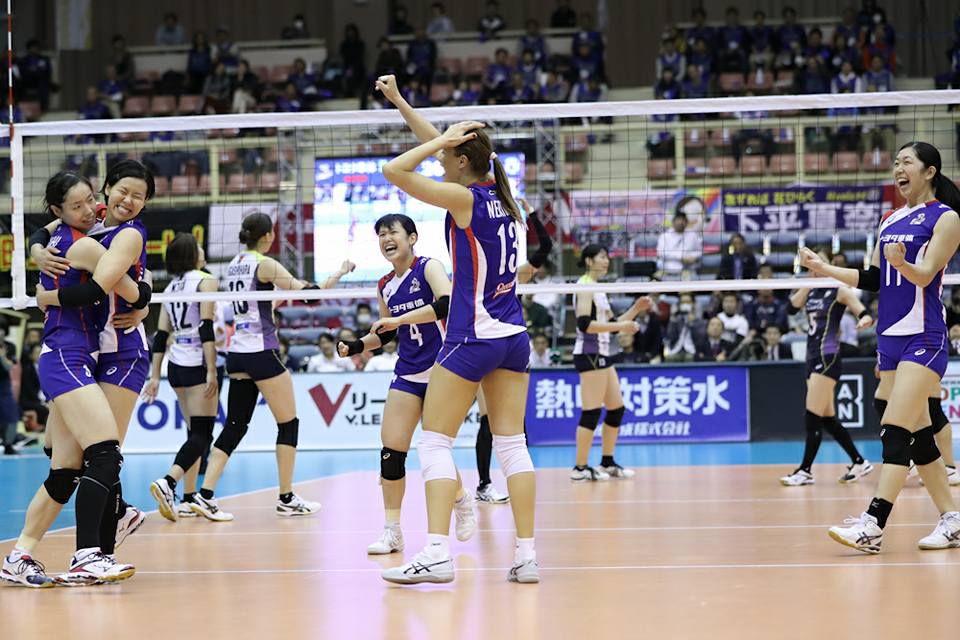 In matchday two of the Women’s Japanese Premier League, two matches were played in Hitachinaka, Ibaraki prefecture, the home of... Current Photo via V.League

In matchday two of the Women’s Japanese Premier League, two matches were played in Hitachinaka, Ibaraki prefecture, the home of Hitachi Rivale and the other two matches in Suzuka, Mie prefecture.

Hitachi hosted Toyota Autobody Queenseis. The Queenseis took the first set handily 25-15, but had to go extra points in the second (27-25) and third set 28-26 to sweep Hitachi. Erika Araki had 10 points (6k, 1a), 3 of which were blocks. Araki leads the league in blocks at 1.5 per set. Turkey’s Neriman Ozsoy for Toyota was the leading scorer in the match with 22 points (19k, 2b, 1a). Curtsy Jackson for Hitachi had 15 points (13k, 2 b). Toyota with win, takes over first place on points.

Hisamitsu Springs faced JT Marvelous Suzuka, in a close fought five set match, with four sets only being decided by two points. Hisamitsu came from two sets down to win the match 3-2. Serbian Brankica Mihajlovic led all scorers with 26 points (25k, 1b) for JT. Risa Ishii for Hisamitsu had 25 points (23k, 2a), and Rika Nomoto had 23 (19k, 3b, 1a) for Hisamitsu. American Foluke Akiradewo also for the Springs had 4 blocks in her 15 points (10k, 1a). JT had five players in double figures, Yuka Kanasugi with 21 (19k, 1b, 1a) and Yuka Kitsu had 4 aces with her 11 points (6k, 1b). Hisamitsu drops one spot from 1st to 2nd place with the win.

Denso Airybees met Toray Arrows in Suzuka as both teams looked to get their first win of the season. Toray won the first set 25-20, but Denso took the next three to win the match 3-1. Also with the win, Denso moved up to 3rd place in the standings. Mari Horikawa of Toray led all scorers with 26 points (22k, 3b, 1a). Toray’s Ai Kurogo 20 points (19k, 1a) and American Kadie Rolfzen 17 points (15k, 2a) gave support for the Arrows. Yurie Nabeya was the rock for Denso with 22 points (19k, 2b, 1a). German Christiane Furst put up 11 points (10k, 1b) and Yui Asahi for the Airybees.

NEC Red Rockets played Ageo Medics in Hitachinaka and the Red Rockets were looking to rebound from a poor performance against Hisamitsu on opening day. NEC did just that easily handling Ageo throughout the match to sweep 3-0. Misaki Yamauchi for NEC led the team with 15 points (9k, 2b) and 4 aces. Ageo’s Cuban Kenia Carcaces led the Medics with 18 points (16k, 1b, 1a) but she did not get much help from her teammates. NEC’s win moved them up to 5th place, overtaking the Medics now in 6th.