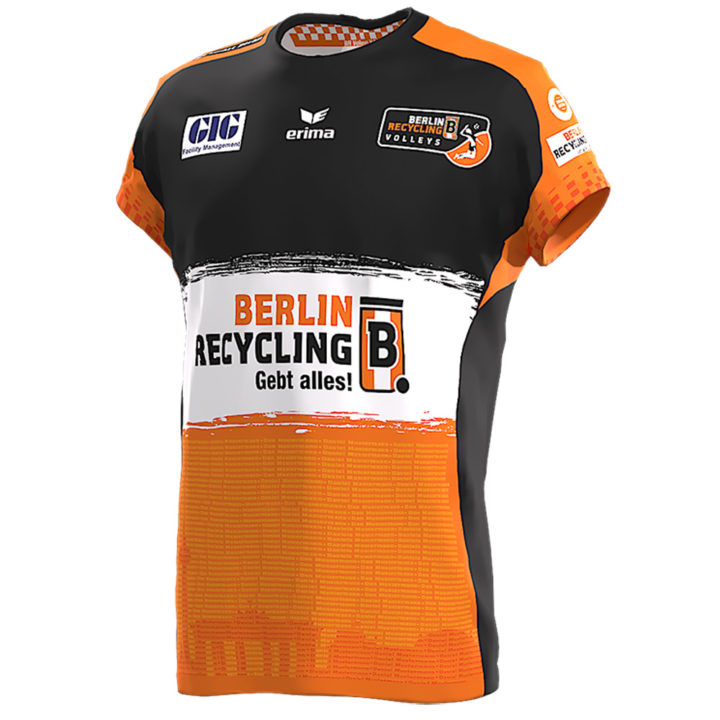 On Saturday March 24th, the Berlin Recycling Volleys of the German Men’s Volleyball Bundesliga released their 2018-2o19 home jersey. Berlin Recycling Volleys are sponsored by a recycling company and the team wanted to incorporate complete recycling in their design. German manufacturer Erima created a design for the team’s jersey which uses 100% recyclable material from plastics.

Berlin Recycling in known for their orange and black color scheme and the new jersey has also managed to add a great deal of Berlin in the new design (shown above). On the front of the jersey, there are three symbols of Berlin outlined at the bottom of the chest. They are, from left to right, the Berlin Television Tower, the Brandenburg Gate and the Reichstag building. These three landmarks will be filled in with text of 400 fan names who have donated money for the Berlin Volley’s kids camp. Additionally there is a white panel that appears to be painted across the chest which has the Berlin Recycling logo. On the top of the jersey, the black panel has the team logo on the right side of the chest, while Erima’s logo is in the middle, and GIG Facility Management’s logo on the left. The collar for the jersey is black. 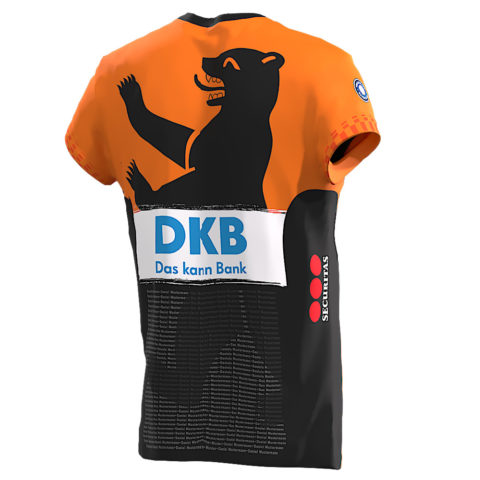 When the jersey is switched to the back, the predominant design is the black bear from the city’s Coat of Arms. The top part of the back is in orange and stops just in front of the collarbone on the front of the jersey. The black bear from the Coat of Arms is completely in black. The fans names will outline the shape of the black bear on the bottom part. The white panel that appears painted has the sponsor logo of Das kann Bank (DKB) in a lighter blue.  The sleeve holes have a two tone orange checkerboard pattern.

The team will use white lettering for the names and the numbers on both the front and back of jersey, as shown in their youtube video.

Overall, it is a very modern design with the subliminal imaging of Berlin and then the bold look of the black bear from the Coat of Arms on the back. It is a solid look for Berlin Recycling in 2018-2019.

Berlin Volley, one of the most popular teams in Germany, recently filed an appeal with the CEV over the outcome of their Champions League loss against vfB after a scoring-table error gave their opponents 2 points instead of 1.