K-State Advances To Second Round With Sweep Over Lipscomb 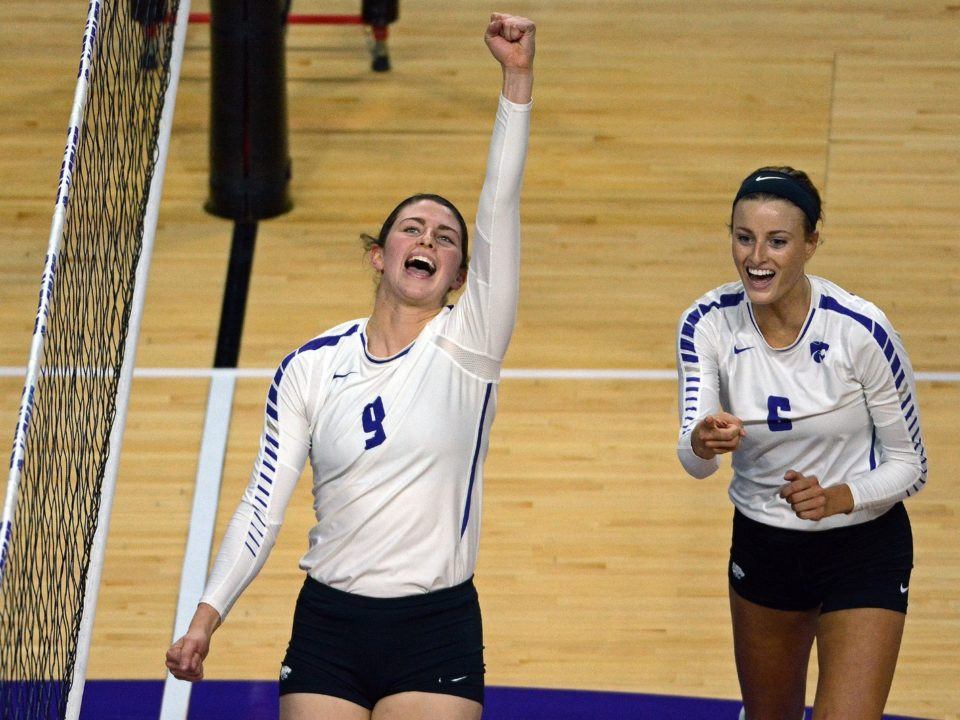 K-State wins their first postseason match since 2011 and first home victory in the tournament since 2007.

For Lipscomb, Lauren Anderson recorded 12 kills, while Brittany Thomas picked up 11 digs and Carlyle Nusbaum put down eight kills and picked up 10 digs.

MANHATTAN, Kan. – The Kansas State volleyball team advanced to the second round of the NCAA Tournament after a straight-set victory over Lipscomb (28-26, 25-15, 26-24) Friday night at Bramlage Coliseum in front of 2,447 fans.

It was K-State’s first postseason win since 2011 and first home victory in the tournament since 2007. The Wildcats’ .374 (48 kills-8 errors-107 total attempts) hitting percentage is an all-time program high in the NCAA Tournament.

“I thought we were well prepared,” said head coach Suzie Fritz. “I felt that we had tremendous composure throughout the rest of the match when they pressed us. I felt like we maintained really nice composure, just feeling like we were going to win the next point.”

K-State (21-9) had to battle to an opening-set 28-26 victory over Lipscomb (22-8), who made its third straight NCAA appearance. The Wildcats fell behind, 9-3, and did not take their first lead until 21-20. Back-to-back stuff blocks ignited a 6-1 midway through the frame that helped the Cats crawl back. K-State recorded 6.0 team blocks in the set, led by senior Katie Reininger with four.

The Cats were dominant in the middle set from start to finish, scoring the first five points and later led 19-5 after an 8-1 run.  Senior outside hitter Brooke Sassin picked up five kills in the set on eight swings without an error, aiding the Cats to a .345 (13k-3e-29ta) hitting efficiency in the set. K-State picked up four more team blocks that held Lipscomb to just an .028 (9k-8e-36ta) attacking percentage.

The third set was tightly contested throughout as K-State’s largest lead was two points after senior setter Katie Brand dumped a ball over the net to seal the sweep of the Bisons. The final set saw 10 tied scores and both sides hit higher than .400. Reininger had four kills on four swings while junior Bryna Vogel and sophomore Kylee Zumach also tallied four kills in the set.

“I did not think that we played incredibly clean from start to finish,” Fritz added. “But we did hit .374, which is a pretty nice night for us. Also, .374 will keep us in a lot of matches.

Sassin led K-State with 11 kills, while six Wildcats produced at least half a dozen kills.

K-State will face Ohio State (21-12) Saturday night in the round of 32 at Bramlage Coliseum. First serve is set for 7 p.m. CT and will be broadcast on ESPN3, WatchESPN and the ESPN app. The Cats seek their fourth appearance in a regional semifinal and first since 2011.

·         K-State is 6-3 at home in the postseason while this was the first postseason match held at Bramlage Coliseum.