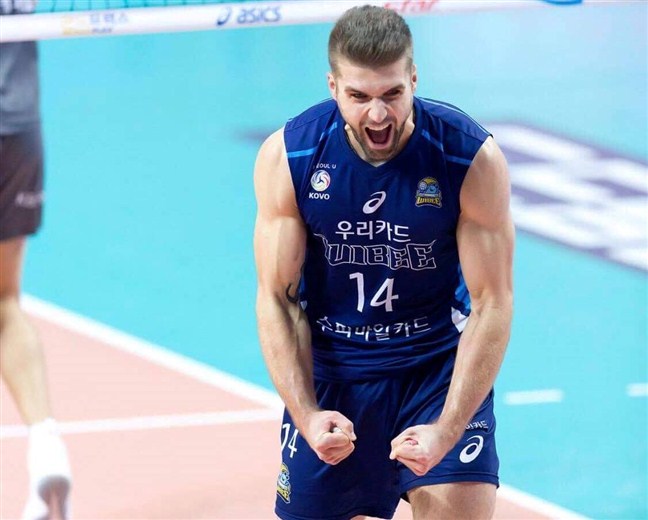 Young Hungarian, Krisztian Padar has become a popular feature in the Korean National League, with his latest video sparking more than 1 million views on Facebook. Current Photo via CEV

Young Hungarian, Krisztian Padar has become a popular feature in the Korean National League, with his latest video sparking more than 1 million views on Facebook.

The young player is in his second season in the Korean league after spending time with Noliko Maaseik in Belgium. In the Korean league, they offer up a draft-like system, where the top-24 international players are brought in to try out. Padar was originally on the list at #48, but with other players announcing their commitments to clubs in other countries, he quickly moved up to be able to try out for a club. Padar became one of the 7 players that were selected from the tryouts.

Padar has been with Woori Card Wibee for the past two seasons and will have to remain with that squad throughout his time in Korea, as he cannot transfer to another team in the league per the league rules. The Korean National League features 7 teams with the level of play rapidly improving with the help of foreign players.

Recently, Padar was a fixture in the leagues All-Star Games – this is where is seven-digit fame came in as he decided to dance to a popular K-Pop song with bunny ears on.

“Since the All-Star Games is not about winning or losing, my girlfriend who is with me here in Korea said I should have a bit of fun with the fans and that is how this all came about,” said Padar.

Padar, while enjoying his time in the Korean League, hopes to be able to play in one of the more elite leagues one day – listing Italy, Poland and Russia as his top choices.

Woori currently sits in sixth place in the Korean League, with a 10-15 record and 32 points. Their next match will be on January 30 against KB Stars who sit just one place ahead of them in the rankings.