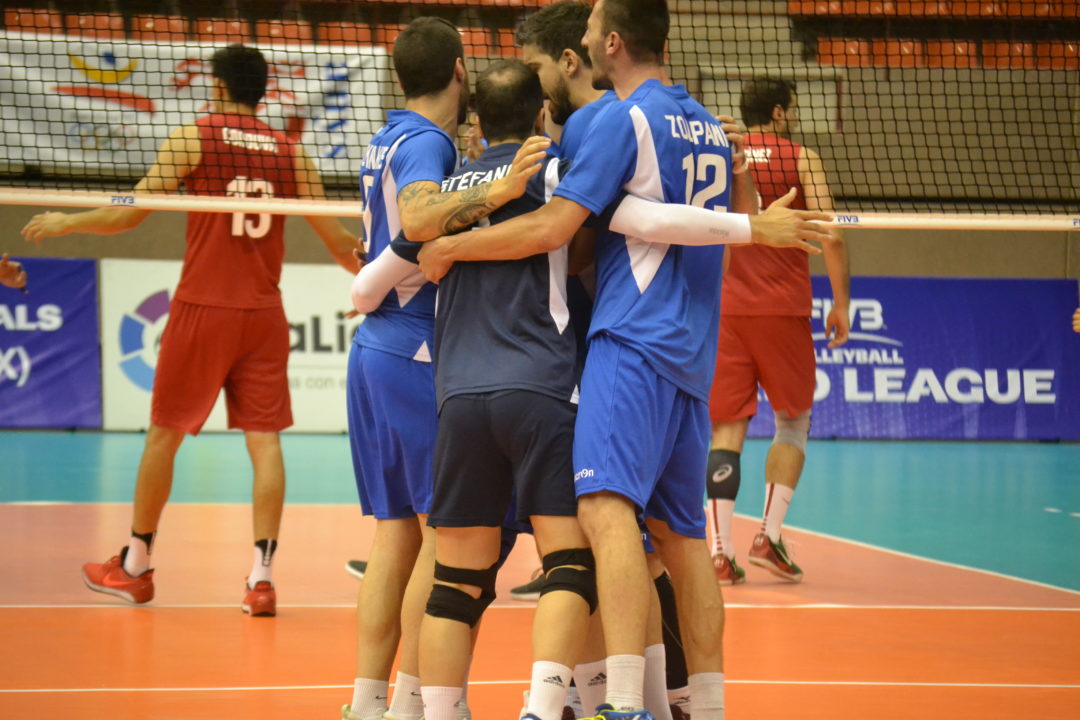 Greece hung on for a five-set victory over Egypt to win Bronze with other placement matches occurring at the Mediterranean Games. Archive Photo via FIVB

The Mediterranean Games, a collection of nations to compete in a myriad of sports including volleyball, is starting in 2018 as opposed to its normal four-year cycle of 2009, 2013, 2017 after the host needed to push it back a tad. For men’s volleyball, pool play has now come to a close as we head to the placement matches to determine the final order.

In total, there were four different pools, each consisting of a trio of teams. Following a quick round-robin, the lowest ranked team in each pool was eliminated with the top two moving on to the quarterfinals. After that, we moved on to the semifinals for both the winners bracket and the 5th-8th place classification with the placement matches today and the championships tomorrow.

Greece looked ready to roll to a quick sweep of Egypt, but there was always a sense Egypt could strike back with two close first games. That finally happened in the third and fourth and the beginning of the fifth, but a 5-0 spurt to finish put the Greek side out on top to win Bronze and collect a top three finish. After keeping the total score at 106-106, Egypt ends in fourth.

It was all about offense versus defense, with the Greek side carrying the lead in spikes (66-49) and Egypt owning a one-sided edge in blocks (19-7). Additionally, the serve was in favor of Egypt in terms of aces (8-3) and aggression. Still, with both teams sitting on the same amount of errors, the attack was the key difference – although realistically it was just that five point stretch to end the fifth. Individually, Nikos Zoupani (29 points) continued to star for Greece with one of his top performances with Anestis Dalakouras (12 points) third on the team in points but tying for the lead in the fifth game specifically (3). In the losing effort for Egypt, they found a bit more balance and were led by Ahmed Saeed (13 points) and two others in double-digits, but none with quite the outburst of Zoupani.

After finishing second in the 2013 games, Tunisia couldn’t muster up quite the same success as they end up sixth after falling to Croatia, who earns a top five finish. It was all about a block that out-did Tunisia 17-7 in total team blocks, which kept quiet the Tunisian offense just enough to squeak out the first game and win tight third and fourth sets. Add to it that Marko Sedlacek (21 points) for Croatia was spectacular and out-dueled Hamza Nagga (16 points), who has been the top option all tournament for the Tunisian side. Croatia also logged more spikes (51-47) and aces (6-3) in earning a fifth place conclusion.

Although it had the least on the line, the battle for seventh place was one of the best matches on the day at the games. It featured a five setter where Turkey overcame a 2-1 deficit – although just one of the sets was extremely tight in the third when things went to extra points. That’s the one that gave France a 2-1 lead before Turkey wound up claiming 40 of the next 68 points for the comeback and match win. France actually wound up with 16 more kills (61-45), but their 14 extra team errors and and the Turkish block (14-5) led to the win. Mustafa Koc (17 points) led Turkey while Julien Winkelmuller (20 points) was on top for France.