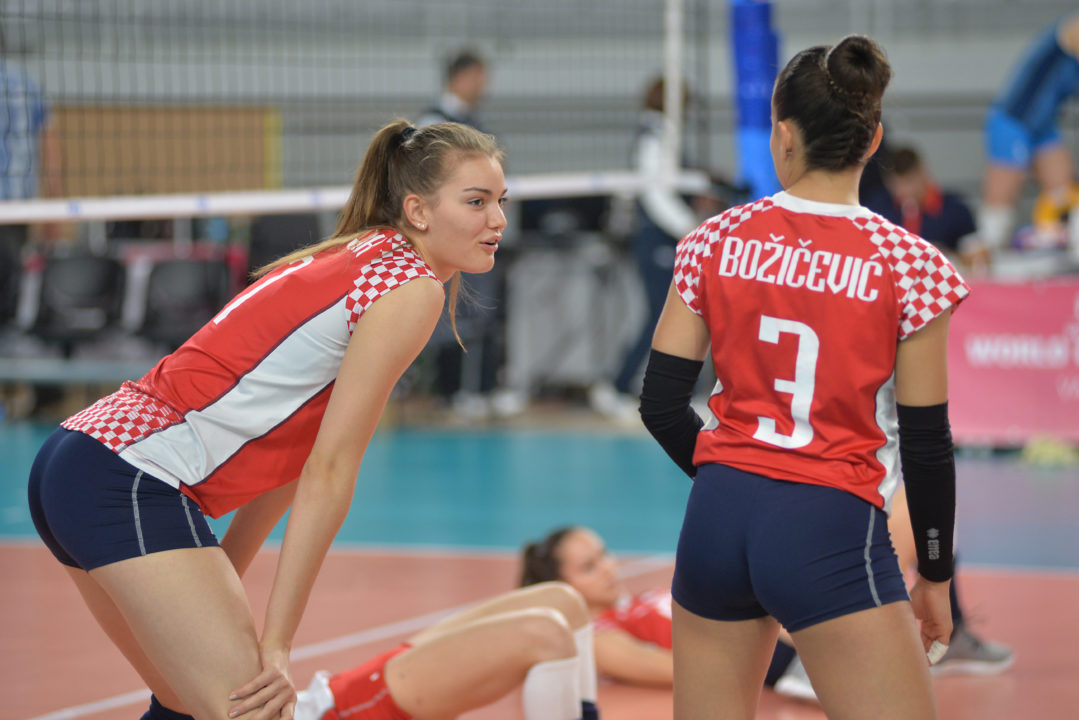 Croatia is one of four teams moving on to the semifinals after a quarterfinal victory at the 2018 Mediterranean Games. Archive Photo via FIVB

The Mediterranean Games, a collection of nations to compete in a myriad of sports including volleyball, is starting in 2018 as opposed to its normal four-year cycle of 2009, 2013, 2017 after the host needed to push it back a tad. For women’s volleyball, pool play has now come to a close as we head to the quarterfinals to help determine the champion.

In total, there were four different pools, each consisting of a trio of teams. Following a quick round-robin, the lowest ranked team in each pool was eliminated with the top two moving on to the quarterfinals. On the women’s side, the semifinals will play out on June 29.

Despite being down 2-1, Portugal seemed ready to push to five or potentially earn a comeback after they dominated the second and lost in extra points in the first and third. Croatia finally played their top game in the fourth though to move on to the semifinal round where they will face Turkey as they were led by a strong serve.

Portugal had a bit more balance in the match too, led by captain Juliana Antunes (11 points), and a better block, but the outbursts from Croatian captain Samanta Fabris (20 points) and Martina Samadan (17 points) were enough to push them over the top.

France upended Slovenia in what was a very odd five-set match. The French dominated the first, fell behind 2-1, then staged a comeback where they outscored Slovenia 40-23 in the final two games. As odd as the match was, the result means that France heads to the semifinal round while Slovenia can finish in fifth place at best.

The team stats were incredibly one-sided to France with how much they won their games by. They notched more kills (56-40), blocks (15-6) and aces (11-7). Individually, there were three 20-point scorers in Iza Mlakar for Slovenia and Helena Cazaute and Juliette Fidon (23 points) for France.

After faltering in the opening set, Turkey found their rhythm in set two and exploded for a 50-32 point differential in the middle games. They then held off a late Italian comeback and notched the final three points in the fourth to move on to the semifinals where they will face Croatia.

The Turkish side logged 12 more kills (50-38) and seven more aces (11-4) on five less team errors, which helped them to overcome the deficit in blocks (14-7). Camilla Mingardi (14 points) led the way for Italy, but couldn’t take down the triumphant trio of Saliha Sahin (19 points), Melis Durul (16 points) and Tugba Senoglu (15 points), who created a more spread-out offense.

Arguably the best quarterfinal match was saved for last, as Greece took down the hosts, Spain, for a spot in the semifinals. Each one of Greece’s set wins came by two points, with a pair of the games going to extra points. The result is that the Greek side will take on France in the final four.

Spain was much stronger in terminating shots and posted 11 more kills (57-46) and also logged three more aces (12-9). However, the Greek block (12-5) and five less team errors led to them edging out the home team. It also didn’t hurt that Anthi Vasilantonaki (31 points) could not be stopped and scored more than anyone else in the round. It was almost overcame by the Spanish duo of Jessica Rivero Marin (20 points) and Ana Esamillo Serana (21 points), but Greek was more composed in the key moments in moving on.