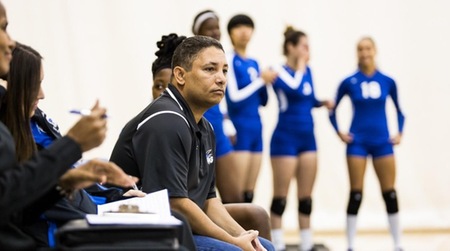 The AVCA has released their selection for the NJCAA Coach of the Year as Miami Dade's Origenes Benoit.  Current Photo via Miami Dade Athletics

The AVCA has released their selection for the NJCAA Coach of the Year as Miami Dade’s Origenes Benoit.

The Sharks went a perfect 34-0 in Benoit’s 12 seasons with the squad to win their second straight NJCAA Division I Championship. Of the 34 matches, 24 were sweeps with the Shark’s dropping just 12 sets of the 114 they played on the year. The Sharks also claimed the FCSAA Volleyball State Championship this season. The team ranked second in the nation with a .319 hitting clip.

Benoit led the team to the District M (Region 8A) title while earning the #1 overall seed in the NJCAA Tournament. Over his coaching career, this season was Benoit’s fourth Region Coach of the Year honor.

Benoit’s sophomore outside hitter will be transferring to Missouri for the 2018 season.

Also being awarded is New Mexico Military Institutes’ assistant coach Alonso Ibarra as the AVCA Assistant Coach of the Year. This is Ibarra’s second season with the Broncos and helped the squad to a 31-12 season this year along with an 11-0 mark in conference play. This season, the Broncos finished third place in the NJCAA Division I Championship.

Benoit and Ibarra will be honored for their distinction at the 2017 Jostens Coaches Honors Luncheon in Kansas City, Missouri on December 14 that is held in conjunction with the 2017 AVCA Convention and the 2017 NCAA Division I Tournament.