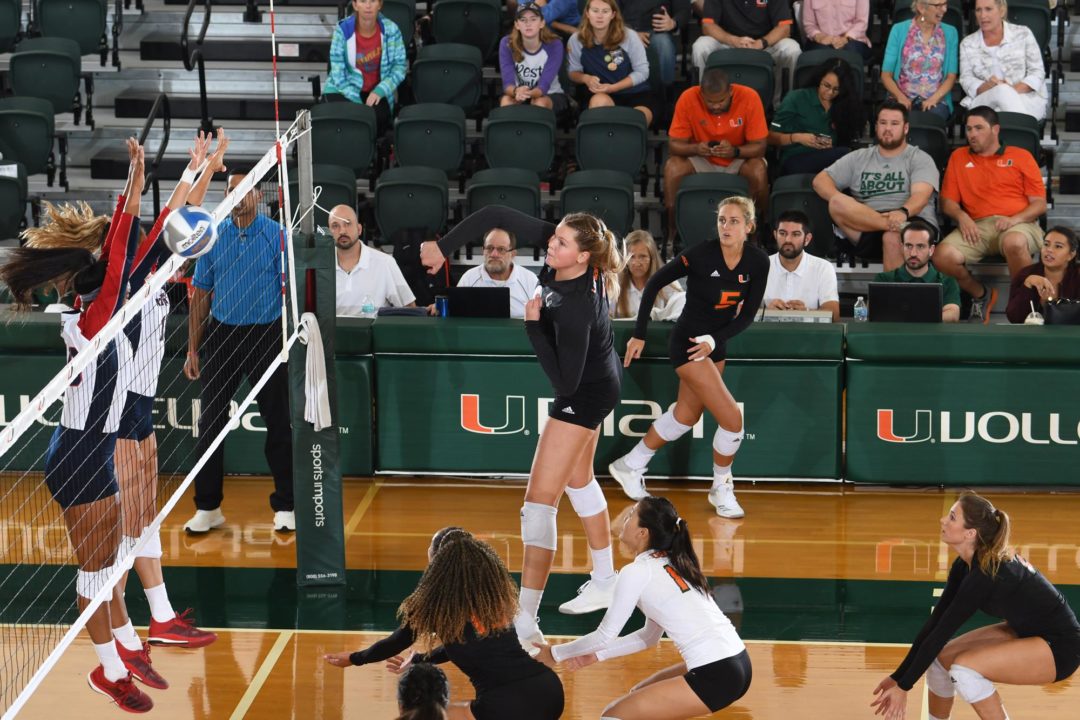 Miami snapped Florida State’s 6-match win streak with a thrilling victory in 5 sets at home on Wednesday night. The Hurricanes hit .197 and served up 7 aces, while holding the Seminoles to a .174 attack percentage and 4 aces. Current Photo via Miami Athletics

Miami snapped Florida State’s 6-match win streak with a thrilling victory in 5 sets at home on Wednesday night. The Hurricanes hit .197 and served up 7 aces, while holding the Seminoles to a .174 attack percentage and 4 aces.

Florida State held a 14 to 10 advantage on the block, but it was not enough to overcome Miami.

Chopped down those Noles😏 pic.twitter.com/loFosjZz0m

It was evenly matched the entire way beginning with an extended first set. The Hurricanes were able to pull out the win 30-28, breaking a string of 14 ties with a 3-0 closing run for the advantage.

In the second set, Florida State and Miami were neck and neck again, competing through 11 tie scores. To edge the Hurricanes and even the match with a 25-23 win, the Seminoles scored 10 of the final 17 points.

Florida State used an 11-4 push to establish a cushion midway through the third set. The Seminoles held off a late rally by the Hurricanes to secure the 25-22 victory and take a 2-1 lead in the match.

The Hurricanes proved they weren’t done fighting yet, pulling ahead 6-2 early in the fourth set. Miami went on to lead by as much as 12 and closed out the victory 25-18 with a 3-0 run.

The fifth set was a back-and-forth one which contained 12 tie scores. Florida State seemed to be on the verge of a win after establishing a 12-8 edge with a 3-point rally, however, the Hurricanes fought back with a 4-point push of their own to knot the score at 12 all. Four more ties followed before Miami could claim the set 19-17 on back-to-back kills by Kolby Bird and Elizaveta Lukianova.

Lukianova finished the match with a career-high 24-kill effort and .400 attack percentage for Miami. She was joined in double figures by Bird (15 kills), Bridget Wallenberger (career-high 14 kills) and Chloe Brown (12 kills). Haley Templeton registered a double-double with 57 assists and 12 digs, while Emily Damon paced the back line with 18 digs.