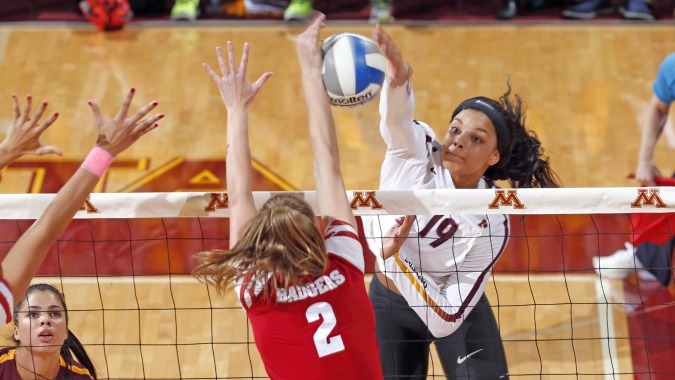 Minnesota earned another undefeated weekend to begin their 2018 campaign, taking down North Dakota State, Georgia Southern and Arkansas. Even in sweeping all three teams, they were without Alexis Hart – whether it was a coaches decision to record the DNPs or Hart is dealing with some sort of injury.

While appearing in the first two matches of the season, Hart struggled in terms of her hitting efficiency. In wins over Florida State and North Carolina, she had 6 kills on 45 swings with 9 attack errors (-.067). She also added 10 digs (1.43 per set) and 6 blocks (0.86 per set).

Continuing to bridge the gap with Hart out of the lineup has been highly-touted freshman outside hitter Adanna Rollins. She has started in all five matches, but in the first two had no kills on just four swings and was in for her back row play. In the three matches this past weekend without Hart, she took on more of a hitting roll and recorded 19 kills (2.11 per set) on a .366 hitting percentage, 27 digs (3.0 per set), 6 aces (0.67 per set) and 3 blocks (0.33 per set).

One year prior in 2016 when the team made the Final Four, Hart was an AVCA All-America Honorable Mention choice and the AVCA North Region Freshman of the Year. However, she’s never been a top passing option and floor defender for Minnesota, who is looking for a consistent six-rotation outside hitter with their other top OH, Jasmyn Martin, also being a front row player. That’s what could make Rollins even more valuable to the Gophers. Of course, there could be other reasons that could be the cause of Hart’s lack of appearance on the court after such a strong first-two seasons with the program.

Minnesota, following the 3-0 weekend, sits at 5-0 and is ranked 4th in our latest VolleyMob Top 25 Power Rankings. After playing a schedule of teams that are a combined 9-19 right now though, they’ll face a high-level challenge this week for whoever starts at outside hitter; they’ll play #18 Oregon on Friday night and at #2 Stanford on Sunday night.