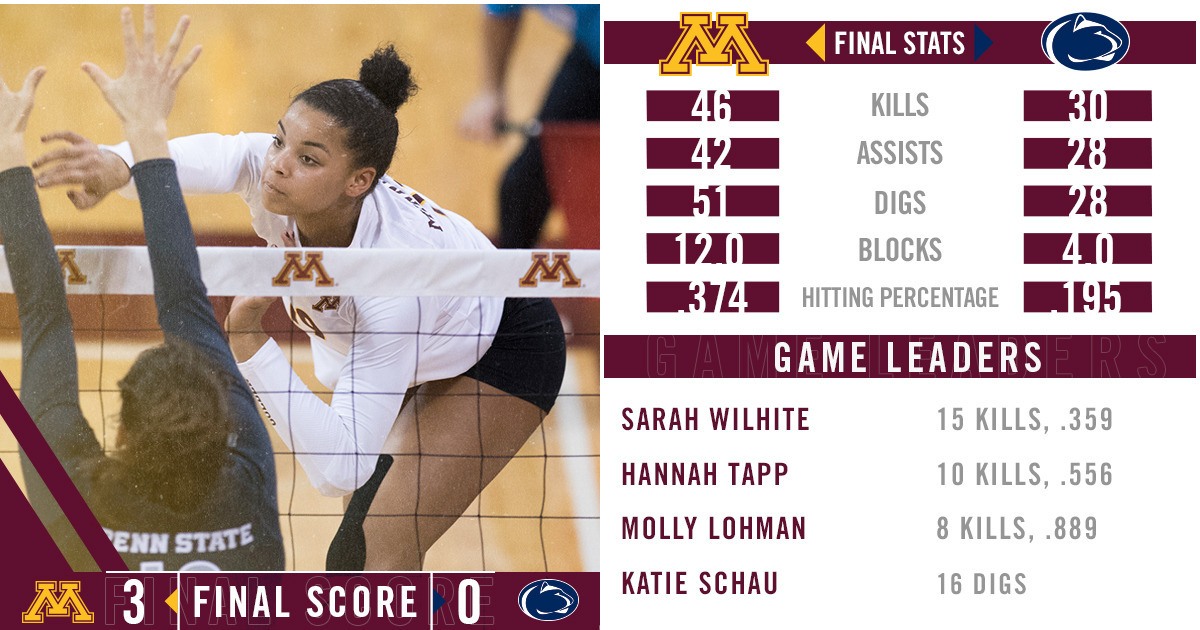 The #3 Minnesota Golden Gophers outhit Penn State .374 to .195 in avenging their early-season loss with a 3-0 thumping of the Nittany Lions in Minneapolis. Current Photo via Minnesota Athletics

The #3 Minnesota Golden Gophers outhit Penn State .374 to .195 in avenging their early-season loss with a 3-0 thumping of the Nittany Lions in Minneapolis.

Minnesota got 15 kills from Sarah Wilhite and 10 kills out of Hannah Tapp to earn their 17th win of the year.

Penn State was one of 4 losses on Minnesota’s schedule after a tight 3-2 match at Penn State. The Nittany Lions did have a game-high 17 kills from Simone Lee, and Lee also had 11 digs for a double double.

The Gophers will remain at home, playing Wednesday night against Indiana at 7 p.m.

Set 1:
Minnesota hit .448 to Penn State’s .211 to take the first set 25-17. Lohman started off the match with a kill in the middle. The set remained evenly matched, with seven tied scores until Minnesota tied it up at 11 and went on a 5-0 run. The Gophers increased their lead to five, causing Penn State to take a timeout at 17-12. Minnesota went on a 3-1 run to increase the lead to seven, forcing a second Nittany Lion timeout at 20-13. Back-to-back kills from Hart ended the set.

Set 2:
The Gophers hit .333 to the Nittany Lions’ .176 to go up 2-0 on the match, winning the set 25-20. Blocks from Lohman/P Tapp and an ace from Seliger-Swenson opened the second set on a 4-0 run for the Gophers. Minnesota continued to hold the lead after back-and-forth rallies, with line shot kill from Hart ending a long rally at 15-11. The Gophers extended their lead to five, forcing Penn State to take its first timeout of the set at 17-12. Minnesota earned a six-point lead at 20-14, the highest lead of the set, and shortly after caused the Nittany Lions to take their second timeout of the set at 22-17. Hart put the Gophers at set point, and a Penn State error ended the set.

Set 3:
The Gophers hit .359 to Penn State’s .205 to take the set and match, 25-18. Minnesota took an early lead and held onto it, going on a 5-2 run to increase the lead to 15-11 off two kills each from Hart and H Tapp. A kill off an overpass forced Penn State to take its first timeout at 17-12. Back-to-back blocks by Lohman and P Tapp continued the momentum, putting the Gophers at 19-13. A Penn State error put Minnesota at match point, and a block by Lohman and P Tapp ended the match.

Lee was the default option for the Nittany Lions on Saturday night, scoring 17 kills to lead all players. The Menomonee Falls, Wisconsin, native hit at a .306 clip, and logged her second double-double of the season with 11 digs.

Penn State returns to the friendly confines of Rec Hall next weekend. The Nittany Lions begin the weekend slate with the No. 1 Nebraska Cornhuskers on Friday, Nov. 4, at 8 p.m., with the match set for national broadcast on the Big Ten Network. PSU then has a quick turnaround, taking on Iowa the next day at 4 p.m.

The match began with the teams swapping points to a 3-3 tie. An overpass kill by Gorrell gave PSU a brief lead, before tying again at 4-all. Washington scored back-to-back points on a ferocious block before a kill off the slide for a 6-4 advantage. Minnesota came back to tie the match at 8-8, when a kill from Lee regained the Penn State lead. A pair of spikes from Lee and a quick kill from Gorrell in the middle gave PSU an 11-9 lead, before Minnesota responded with five points in a row. A kill from Frantti cut Minnesota’s lead to two, before the Gophers scored the next point for a 15-12 lead at the media timeout.

Minnesota scored on a kill and a block to go up five, forcing Penn State’s first timeout, behind 17-12. Penn State scored off a service error from the Gophers, but Minnesota responded with two more points, forcing PSU’s second timeout, down 20-13. Lee scored three times out of the break on big swings to cut the score to five at 21-16. Minnesota scored three straight before a kill from Lee fended off set point. The Gophers scored on the next play for a 25-17, set one victory.

The Gophers were hot out the gates, beginning on a 4-0 run to start the second. Detering hammered down a kill to break up the run, when the teams went point-for-point with Lee, Gorrell, Washington and Thelen all scoring on kills to a 10-7 score in Minnesota’s favor. A block from Thelen and Washington cut the lead to three, before a Minnesota kill at the end of a long rally found Penn State trailing, 15-11, at the second-set media timeout.

Washington spiked the ball to close the gap back to three points following the break, before Minnesota responded with two points of its own. Penn State called for time, trailing 17-12. Detering and Lee scored on kills to pull within four at 18-14. Both sides traded points, with Thelen, Lee and junior outside hitter Ali Frantti scoring before Penn State called for time, down 22-17. Thelen tooled the block and Frantti provided a late ace, but Minnesota proved too tough, taking the second, 25-20.

The Nittany Lions took the opening point of the third on a powerful kill from Detering. Two plays later Lee and Washington posted a major rejection for a 2-1 lead. Minnesota scored three in a row before another kill from Lee closed the gap to one at 4-3. A pair of powerful kills from Lee and Thelen made the score 6-5 for Minnesota. A pair of kills from Lee and another by Gorrell made it 10-9 in the Gophers’ favor. Minnesota opened a 4-1 spurt to climb ahead four, before Gorrell scored her sixth kill of the match to make the score 14-11. Minnesota scored the next play, with the score 15-11 heading into the media timeout.

Minnesota scored two of the next three points, forcing a Penn State timeout, trailing 17-12. Lee, Washington and Frantti each scored as the two sides traded points, with Minnesota edging ahead at 20-15. Lee and Gorrell tacked on kills to make the set score 22-17. Washington added a kill, but Minnesota took the final two points to win the match with a 25-18 decisive third.