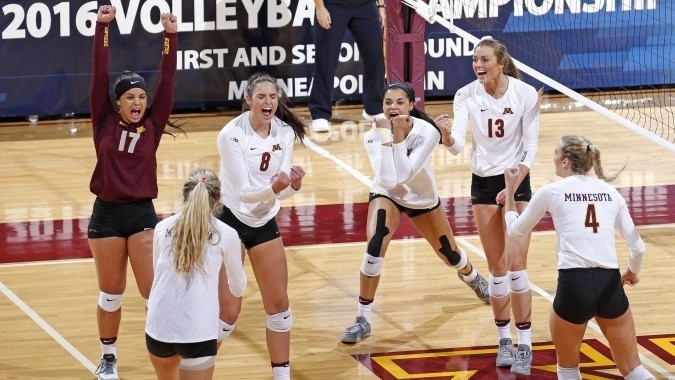 Just last week, Minnesota’s volleyball squad headed to a neutral site to face off against South Dakota in an open... Current Photo via Minnesota Athletics

Just last week, Minnesota’s volleyball squad headed to a neutral site to face off against South Dakota in an open scrimmage.

The morning session started at 10 AM with an hour and a half worth of drills ran by both teams, followed by an afternoon scrimmage in which Minnesota defeated South Dakota 3-1. (There are no stats to the scrimmage).

Last season the Gophers finished their year with a 29-5 record, falling to eventual national champions, Stanford in the semifinals of the NCAA Tournament. After the impressive season, the team looks to continue forward with their success in 2017. The Gophers will have to work hard to replace the standout seniors they lost after the 2016 season.

Key returners for the Gophers – Dalianliz Rosado, Alexis Hart and Samantha Seliger-Swenson. As libero, Rosado picked up 511 digs on the year with an average of 4.06 digs per set. Hart played a big offensive role last season with 359 kills, ranking second on the team. Seliger-Swenson dished out a team-best 1,465 assists in the 2016 season, being named the Big Ten Setter of the Year.

Each of the two middles for Minnesota in the 2016 season, Paige and Hannah Tapp, have moved onto play professional volleyball following their 2016 season. The team also loses the AVCA Player of the Year in Sarah Wilhite, who plastered 537 kills for an average of 4.26 kills per set.

Next on the spring slate for the Gophers is a home match against Iowa State on April 22. The event is open to the public and is free of charge. The scrimmage will start with warm-ups at 1:30 PM with the match starting at 2:30 PM – from there the two squads will face-off in 4-5 sets to 25 points.