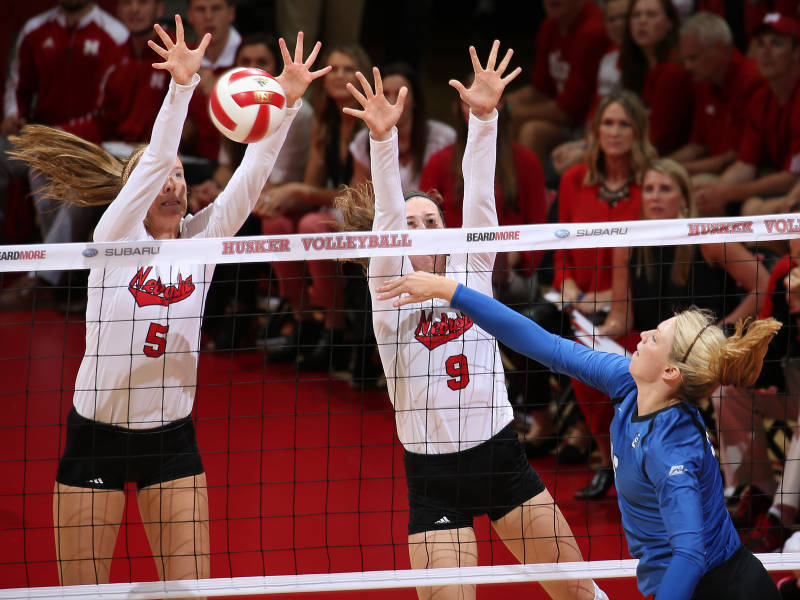 The Nebraska Huskers earned their 20th win of the season with a 3-0 blowout of Big Ten opponent Northwestern Saturday night. Archive Photo via Nebraska Athletics

The Nebraska Huskers earned their 20th win of the season with a 3-0 blowout of Big Ten opponent Northwestern Saturday night.

Kadie Rolfzen hit .500 and notched 11 kills, and Mikaela Foecke added 9 more kills for the Huskers. Nebraska remains #1 in the nation but will face one of its tougher tests this weekend, going to #10 Penn State.

Northwestern had a pair of 7-kill hitters: Symone Abbott and Sofia Lavin. They’ll make a tour through Michigan next weekend, hitting Michigan State and Michigan on back to back days.

Nebraska improved to 20-1 overall and 11-1 in the Big Ten. It marks the best start to a season by a Husker team since the 2008 squad began the season 20-0. The Huskers, who sit atop the Big Ten standings with eight matches remaining, joined the 2011 team as the only Husker squad to win 11 of their first 12 Big Ten matches.

Set 2: Nebraska led from start to finish, and a 4-0 run with a Maloney ace and Amber Rolfzen kill made it 11-5. The Huskers pulled away on Hunter’s serve with a 6-0 run that included three kills by Foecke, an ace by Hunter and a stuff block by Kadie Rolfzen and Holman for a 21-9 lead. The final tally was 25-11 – NU’s most decisive set in conference play this season – as the Huskers held Northwestern to -.133 hitting and posted four blocks.

Set 3: Nebraska led 11-10 before a Northwestern service error and hitting error made it 13-10. Holman blasted a kill and then combined with both Foecke and Kadie Rolfzen for blocks to help increase the Huskers’ lead to 19-12. The Huskers finished off the sweep with the 25-20 win.

LINCOLN, Neb. – Northwestern battled in a tough road environment at Nebraska, but the top-ranked Huskers came out on top in three sets Saturday night at the Devaney Center.

For the second straight night, the Wildcats relied on a balanced offense to put points on the board. Six players registered kills, led by Symone Abbott and Sofia Lavin, who each had seven. The senior Lavin had the hot hand early, racking up four kills on just five attempts in the first set.

Junior middle blocker Gabrielle Hazen had six and hit .364, her third straight match over the .300 mark.

Freshman libero Sarah Johnson continued her strong play in the back row, recording 10 digs, the fourth time in the last five matches she has reached double-digits. Taylor Tashima added seven, and Abbott had five.

The Wildcats came out ready to play in the first set, hitting a combined .440. Northwestern never trailed by more than five but could not quite edge Nebraska, as the Huskers hit .519 and took a 25-20 decision.

Northwestern stays on the road next weekend when it travels to the state of Michigan for contests at Michigan State on Nov. 4 and Michigan on Nov. 5.