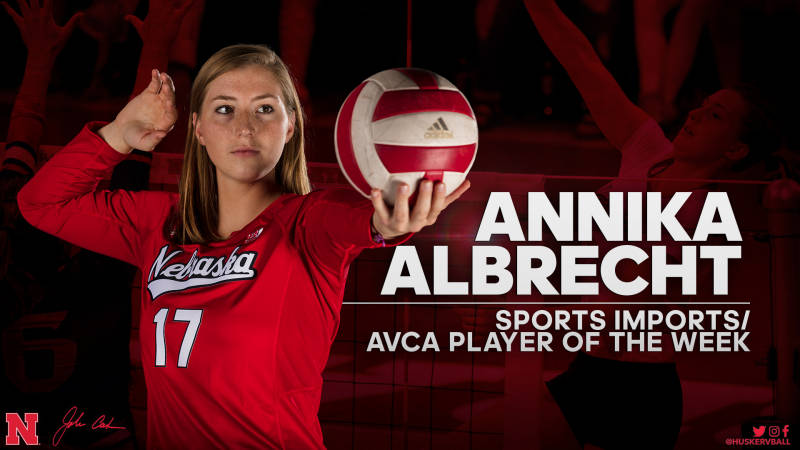 After helping Nebraska to an undefeated weekend and a win over #2 Penn State, Annika Albrecht has been named as the AVCA Player of the Week. Current Photo via Laura Leffler

After helping Nebraska to an undefeated weekend and a win over #2 Penn State, Annika Albrecht has been named as the AVCA Player of the Week.

During the week, Albrecht played in six sets over the course of two matches, as the Huskers took down Penn State and Rutgers, each in straight sets. She posted 5.16 kills per set while having a .379 hitting percentage. In addition, Albrecht added 1.67 digs per set and 0.83 blocks per set.

Against Penn State, Albrecht was instrumental in downing the Nittany Lions in straight sets on the road – something that hasn’t happened on their home court since 2003. Albrecht posted a career-best 19 kills on a .400 hitting clip, while also adding six digs and four blocks. In the Huskers next match, Albrecht posted another 12 kills while hitting for .400 in the sweep against Rutgers.

On the year, Albrecht has slammed down 122 kills on a .258 hitting clip for an average of 3.05 kills per set. Additionally, she leads the team in digs with 199 for an average of 2.78 digs per set and 17 total blocks on the year. This week, Albrecht also claimed the Big Ten Player of the Week for her performance in the opening week of Big Ten play.

This is the first time that a Husker has claimed the award since Amber Rolfzen did last season on October 25 and is the 15th Nebraska player to earn the honor.