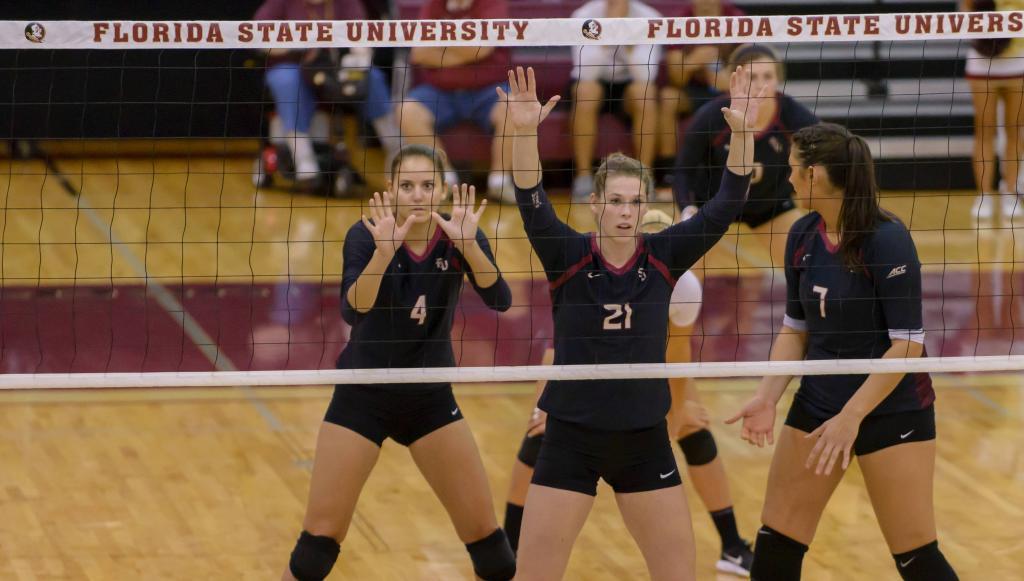 Kubura, who finished with a .400-plus hitting percentage (.450) for the third straight match, led the Seminoles (15-3, 8-1 ACC) in kills for the ninth time this season. Joining the hard-hitting junior among offensive leaders were Horton, Christina Ambrose (six kills) and Mara Green (six kills, .667 hitting pct.), as the Florida State offense finished with a 40-27 edge in kills and a .261 hitting percentage.

Keil, who has now tallied five or more assisted blocks in each of her last four matches, led the way for a front row that recorded 17 total blocks and limited Miami (8-13, 2-7 ACC) to a .010 hitting percentage. Junior Natasha Calkins was also active on defense for Florida State with four assisted blocks to go along with her five kills

Among the back row leaders with Horton were Hailey Luke (nine digs) and Cecilie Woie (seven digs). Luke narrowly missed a double-double as she was also responsible for 10 assists.

“I am very pleased overall with the win,” said head coach Chris Poole. “We did some things on the court that have been a focal point in practice. We let down a little in the third set, but still finished off the match on the road against a big rival. Melanie had another big blocking match, while Milica, Mara and Natasha hit for a high percentage for us.”

Green and Horton emerged with two kills each and Keil added two blocks to provide Florida State with a 12-6 advantage at the mid-way point of the third set. Miami scored seven of the next nine points, receiving a pair kills from Olga Strantzali, to quickly pull with two of the Seminoles.

Four unforced Miami errors along with an assisted block by Horton and Keil provided the Seminoles with a 21-17 lead. The Hurricanes made one final push, narrowing the margin to three, but it was strikes by Kubura and Calkins that completed the 10th three-set victory in the series for Florida State.

Calkins recorded two early kills and added an assisted block as the Seminoles built an 8-4 lead in the second set. Miami, again forced to burn an early timeout, scored the next three unanswered points to trim the lead to one.

Five kills by the Seminoles, including three from Horton and two by Green, stretched the FSU lead to 18-8. A second Miami run, this time highlighted by the service game of Sara Duque, narrowed the deficit to five, 18-13. The combination of two kills from Kubura and four unforced errors by the Hurricanes provided the Noles with the 10-point win.

Florida State took advantage of six attack errors and a block by Keil as it assumed an 8-2 advantage early in the opening frame. Miami briefly sliced the margin to four, before five kills from the Seminoles, including two by Horton, doubled the Florida State lead to 16-8.

Miami’s second timeout of the set, following an Ambrose kill, was not enough to derail the Seminole offense which received back-to-back kills from Kubura as the lead reached 10. Leading 22-10 following a kill by Calkins, Florida State capitalized on a Horton kill and a Keil service ace to complete victory.

Florida State wraps up the week at Virginia (4-16, 1-7 ACC) on Friday at 7 p.m. when it heads to Charlottesville, Va., for the first time since the 2013 campaign. The Seminoles have won the last seven meetings, posting four sweeps along the way, including a 3-0 victory on Nov. 8, 2015 in Tallahassee.

The Hurricanes (8-13, 2-7 ACC) came up short against the No. 12 Seminoles (15-3, 8-1 ACC) in their second meeting of the year. Miami head coach Jose “Keno” Gandara believes the Canes put themselves in a hole early and that proved to be the difference.

“I thought we made too many errors in Games 1 and 2, so it was an uphill battle from there on,” Gandara said. “I think we settled a little bit and cut back in errors a lot. We got opportunities. They made some errors and we got to play a little bit more and that was the key. I thought we served and set a little tougher in Game 3.”

The Canes and Noles battled early in the opening set, with Florida State calling timeout up, 8-4. The break would prove effective for the Seminoles as they doubled their lead to eight, 16-8, and forced Miami to call timeout to regroup. Florida State would take nine of the next 14 points to close out their 25-12 win in the first set.

Miami started fast in the second set, taking a 4-2 lead, but the Seminoles battled back with a 6-0 run to take an 8-4 lead and force a Hurricanes’ timeout. The move would prove wise, as Miami would take the next three points before Florida State followed with four consecutive points that led to Miami’s second timeout of the set. With Miami out of timeouts, the Hurricanes could not stop play to regroup and the Seminoles would pull away to take the set, 25-15, and enter the intermission up two sets to none.

The Seminoles jumped to a 12-5 lead in the third set before Miami made a big push, taking eight of the next 11 points to be down just two, 15-13, at the media timeout. The two rivals continued to battle with Florida State taking a 21-17 lead before Miami called timeout. The Seminoles would reach match point at 24-20, but Miami would take the next two points to force a Florida State timeout at 24-22. The Noles would close out the three-set win with a 25-22 victory in the final set.

Lucia Pampana had five kills and tied with Bird for the team lead with four blocks, while Sakile Simmons added a kill and a block.

Miami will travel to face Virginia at 7 p.m., on Saturday in Charlottesville, Va. Following this week’s matches, the Canes will continue their road swing with a trip to Notre Dame for a 7 p.m. match on Oct. 28. Miami will also play at Louisville at 2 p.m., on Oct. 30.