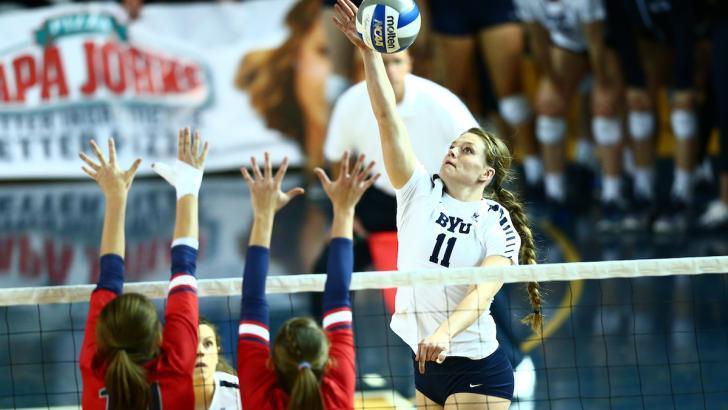 The Cougars offense was on point out-hitting the Gaels .413 to .064. McKenna Miller and Lacy Haddock each had 10 kills for the Cougars, Miller with a hitting percentage of .444. The team also recorded eight aces, one away from their season-best of nine.

Saint Mary’s struggled to get anything rolling. Payton Rund led the Gaels with seven kills, followed by Lindsey Kundsen and Lindsey Calvin who each put down six.

The first set, the Gaels stayed fairly close behind the Cougars, but could not keep that trend up, faltering in the final two sets.

“We wanted to get back to our game in terms of serving and passing and I thought we did that tonight,” BYU head coach Heather Olmstead said. “It was great to be back home. I thought the environment was great with good energy and our team feeds off of that. The girls were very focused as well, so it was awesome.”

The Cougars (15-2, 4-1 West Coast Conference) defeated the Gaels (8-9, 3-3 WCC) with a .412 hitting percentage. Haddock as well as McKenna Miller each finished the competition with 10 kills. Senior Amy Boswell chipped in seven kills, and sophomore Danelle Parady-Stetler had five. Lyndie Haddock had 24 assists and seven digs and Mary Lake added eight digs. The Cougars also had eight service aces, only one away from their season-high of nine.

The first set featured a back-and-forth battle between the Cougars and Gaels, with each team trading points and leads (seven ties and three lead changes). A kill by Miller and two aces byLacy Haddock gave the Cougars momentum at the beginning of the set, but strong defense on the Gaels’ side not only kept them in the set but gave them a 16-12 advantage over the Cougars. BYU then went on a 7-1 run and found themselves with a 19-17 lead over SMC. The score remained close, but the Cougars maintained an edge over the Gaels until they ultimately took the first set, 25-20, on a Boswell and Haddock block.

The Cougars jumped to a 7-0 lead over the Saint Mary’s at the beginning of the second set and were able to maintain a comfortable advantage throughout. The Gaels began to put points on the board, but the Cougar edge was extended to 10 points, 11-1, on a Miller kill. The Gaels continued to struggle against a solid BYU defense that featured five digs from Parady-Stetler and two from senior Makenna Santiago. Six kills from Miller helped the Cougars to extend their lead to a set-high of 11 at 21-9. BYU kept a comfortable lead over Saint Mary’s until it won the set, 25-14.

The beginning of the third set was much closer than the second, and Saint Mary’s was able to stick with the Cougars, trailing by a point at 6-5. BYU then went on a 6-1 run and jumped to a 12-6 advantage over the Gaels after a service ace and kill from Boswell and two kills from senior Whitney Young Howard. The Cougars continued to extend their lead over Saint Mary’s and reached a double-digit advantage at 17-7 after a kill by Parady-Stetler. BYU continued its run with eight more points to the Gaels’ three, and the Cougars took the match at 25-10.

The Cougars remain in Provo this weekend and will take on the Pacific Tigers Saturday at the Smith Fieldhouse at 1 p.m. MDT. The match is also Family Day. Entire families can enter with a $15 family pass. Pass of all Pass holders will get into the match for free. Additionally, there will be four hot dogs available for purchase for $4. There will also be free face painters, games, giveaways and prizes.

PROVO, Utah — It began as what looked to become a very competitive match, but No. 13 BYU gradually gained strength Thursday as it worked towards a 3-0 (25-20, 25-14, 25-10) West Coast Conference sweep over the Saint Mary’s volleyball team at Smith Fieldhouse.

The Gaels (8-9, 3-3 WCC) stayed close to BYU (15-2, 4-1 WCC) through most of the first set. SMC trailed by more than three points only once early on and eventually worked itself to a 16-12 lead. But the BYU defense and SMC attack errors would turn the tide.

The Cougars scored four straight points to tie it at 16-16 and stretched it into a 7-1 run, taking a 19-17 lead. Saint Mary’s made three errors during the run and would make 10 attack errors in the first set alone. The Gaels finished the match with 23 attack errors and a .064 hitting percentage, partly due to 10 BYU blocks.

BYU’s momentum continued to build throughout the match. The Cougars tallied eight service aces and hit .412, including .500 in their 25-10 third set victory. Lacy Haddock and McKenna Miller both had 10 kills to lead BYU. Lyndie Haddock had a match-high 24 assists.

Saint Mary’s road trip continues Saturday when it takes on No. 5 San Diego at noon. The match will be streamed live on the Gaels’ “GaelVision” Gameday Central page.